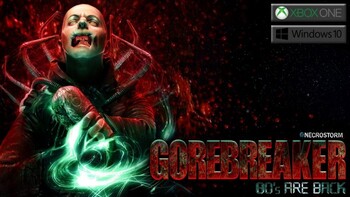 A game that you won't forget so easily

It's December 2067, Earth has Took a Level in Badass. A nearby planet, Xonader, is the biggest name in creating dangerous and powerful Thinking Weapons. During a travel, an engine failure caused a Death Cargo to land on Earth, sending the Thinking Weapons it carried all over the world. Worried, Xonader sends a new Death Cargo to get the Weapons back and to shed some light on the cause of the last one's crash. There's just one problem.The thinking weapons are alive, awake, and active... and they have no intent of leaving...

Giving a 80s-90s feel, Death Cargo was officially released in March 2014 (although reports are varied as to whether or not an official release has actually been made

), and grants a blood-stained good time. Fighting in the classic 2D Gameplay/3D Graphics, Death Cargo doesn't hold any punches. It is produced by the Italian independent company Necrostorm, which also produced the movies Adam Chaplin and Taeter City.

In June 2015, an Updated Re-release has been announced: the game's title will be changed to Gorebreaker, promising to be all that Death Cargo wasn't. Owners of the original will still receive it and any future DLC for free.