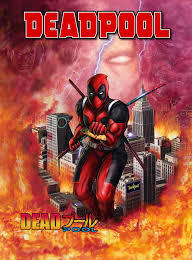 Ever wondered how a NES game starring the Merc with a Mouth will be like? Well, here's your chance to find it out!

Developed by Tech Moon, this ROM Hack was created in 2019 as a hack to Ninja Gaiden. Featuring all new stages, classic Marvel villains and cutscenes featuring Deadpan Snarker Deadpool himself.

Deadpool gets beaten in a duel with Deathstroke, then being given the Infinity Gauntlet by a mysterious young woman. He encounters a number of enemies, including some heroes and villains across the Marvel and DC universe.

during James and Mike Mondays.

Definitely not to be confused with the official video game.