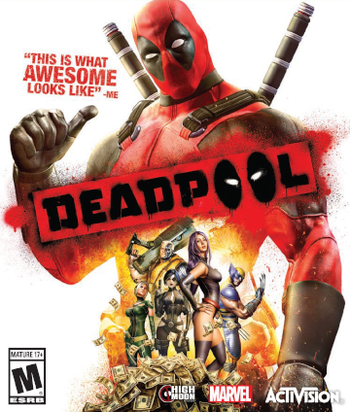 Written and directed by: Deadpool
Deadpool is a 2013 action game developed by High Moon Studios, previously known for their Transformers games. The game stars Deadpool, seeking revenge on Mister Sinister after a botched contract gone wrong. The game was initially announced at the 2012 Comic-Con to great praise, and was released on June 25th, 2013 in America (June 27th in Europe) for PC, PS3 and Xbox 360. Nolan North once again voices the Merc with a Mouth. Deadpool comics-scribe Daniel Way wrote the script and story.
Advertisement:

The game opened to mixed reviews - while both Nolan North's acting and the game's abundant comedy were widely praised, many outlets felt the core gameplay was too simplistic and/or repetitive.

Notably, Marvel messed up the licensing deal, resulting in both this game and a bunch of other Marvel-licensed games (such as Marvel vs. Capcom 3) being out of commission on digital stores for all of two months after its release date. However, Deadpool was eventually put back on Steam, and was also ported onto the Xbox One and PS4 in November 2015. The move was very likely an opportunistic one made by Marvel and the publishers to cash in on the then soon-to-be-released Deadpool Movie which was coming out in February of the following year. The game was, once again, pulled from Steam in November 2017, adding credence to this theory. note At least they put it on sale for 70% off the week before they pulled it.