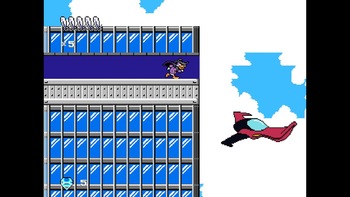 The plot of the game starts with SHUSH calling Darkwing Duck in to help recapture several criminals who've escaped from the local maximum-security supervillain prison after staging a break-out while the prison was being freshly painted. Now the criminals, including several members of Darkwing's Rogues Gallery, are causing mayhem across the length and breadth of St. Canard, and it falls to the Masked Mallard, with help from his allies and close friends, to round them all up and retrieve a number of treasures the crooks have stolen.

This fan-made game provides examples of: