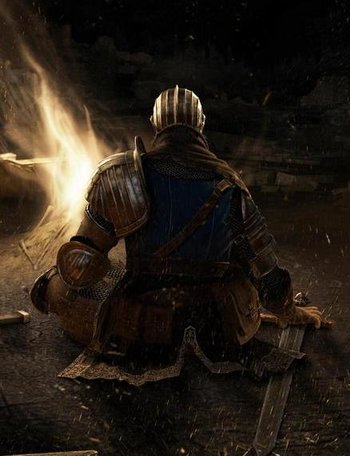 Dark Souls is the first game in the Dark Souls series, developed by FromSoftware and published by Bandai Namco Entertainment. The game is directed by Hidetaka Miyazaki, who previously directed Demon's Souls, the predecessor to Dark Souls.

In the Age of Ancients, the world was unformed, and shrouded by fog: a land of gray crags, arch-trees, and everlasting dragons. But then there was fire, and with it disparity: heat and cold, life and death, light and dark. From the dark came the four lords: Nito, the First of the Dead. The Witch of Izalith and her daughters of chaos. Gwyn, the Lord of Sunlight, and his faithful knights. And the Furtive Pygmy, so easily forgotten. Aided by Seath the Scaleless, a traitorous dragon, they brought an end to the dragons, and ushered in a golden age called the Age of Fire. But now the flames are fading. The world suffers through endless nights, and mysterious brands called the Darksign curse humans with eternal undeath. These immortal undead are doomed to eventual madness as they lose their humanity, and thus are locked away in an asylum in the north to await the end of the world.

Players take the role of one of these undead, as they break out of the Undead Asylum and begin a quest through the huge, non-linear world of Lordran to ring the twin Bells of Awakening, prophesied to reveal the fate and true purpose of the undead.

The game is an Action RPG very much like Demon's Souls, and reuses many elements, such as the combat, online mechanics, and Nintendo Hard difficulty.

The game was released for PlayStation 3 and Xbox 360 on September 22, 2011 in Japan and October 4 and 6, 2011 in North America and Europe. A PC port, Dark Souls: Prepare to Die Edition was later released August 24th 2012. The PC port content was released for PS3 and Xbox 360 as DLC named "Artorias of the Abyss" on October 23, 2012. On December 15th, 2014 FromSoftware began the PC version's transition off of the now defunct Games for Windows Live platform in favor of upgrading to support Steamworks, allowing players to transfer their data and achievements in the process. It has two sequels, Dark Souls II and Dark Souls III.

An Updated Re-release, Dark Souls: Remastered, was released May 25, 2018 for PlayStation 4, Xbox One, Nintendo Switch, and PC. The remaster adds up to 6 player online pvp / co-op, redone textures, and depending on the platform, improved lighting, resolutions, frame rate and so on. And yes, praise the sun, they fixed Blighttown.

open/close all folders
A-C
D-I
J-P
Q-Z
"Well, now you know... And I can die with hope in my heart."
Feedback

The Bed of Chaos

The Bed of Chaos