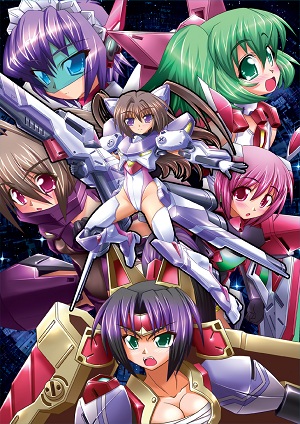 DYSNOMIA is a doujin third-person shooter game by the defunct circle of 2CCP, originally released during Winter Comiket 75 on December 29, 2008.
Advertisement:

Its story is set in the year 21XX where human technology has advanced to the point of developing androids. One day however, researchers discovered another android from inside a meteorite that crash-landed on the planet, one possessing technology that far exceeds anything on Earth. Its substantially low energy consumption and the resources available were capable of powering the android almost indefinitely. As android development technology began to quickly evolve, various uses for androids throughout the world was discovered, eventually leading to the creation of Armed Dolls (ADs), androids made specifically for military purposes and combat. A few years later, however, sudden attacks broke out within various towns and military bases from rogue Armed Dolls within each country. A special Armed Doll organization was then founded to investigate the cause of the androids turning against mankind and eliminate them. The organization however suspect that these attacks are not simply caused out of the blue, but rather the AI of the Armed Dolls are being hi-jacked into rebelling against their human creators.

Gameplay is similar to a third-person arena shooter, however many characters take advantage of their ability boost and fly around the arena. The original game featured a small assortment of Armed Dolls available, each with their own unique set of weapons: Slyphyris, the all-around combat AD; Lilly, an AD maid; Ayame, a ninja AD; Linavulgar, a samurai AD; and Meryl.Y.T, a pint-sized AD piloting a Mini-Mecha. Despite the relatively small number of characters available at the start, the game features different "Types" for each characters with various sets of weapons. The game featured an Arcade Mode to play against the computer and an online Network Mode to battle other players over the Internet. Over the course of time since its initial release, the game received update patches to fix bugs in the game and adjust the gameplay mechanics. It later received an updated version in the form of DYSNOMIA ExBurst on December 30, 2009 during Comiket 77, however those with the original game can upgrade to ExBurst through patches from the game's website (when they use to be available anyway). ExBurst featured two more playable characters, a mission-based Story Mode, a Free Battle mode, and revised online multiplayer, among other things. DYSNOMIA ExBurst can be purchased from the Japanese DLsite here

Full disclosure: The majority of this article was written without knowledge of Japanese and from guesswork using machine translation. As such, it is almost certainly missing important details or has gotten things wrong. If any helpful tropers come along and wish to assist with revising this article, data and resources can be found from archived information here