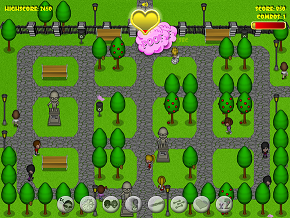 Venus looks down from the heavens and sees a world where love is disappearing. Everywhere people are fighting and breaking up. She decides to send her son Cupid down to the world to give love back to the world.
Advertisement:

Cupid is a 2D-shooting-game developed by a group of students at the University of SkÃ¶vde as a school project. The game is played by shooting people with love arrows and then make sure that they meet other people who have been hit to get points. If someone who has been hit meets someone who hasn't been hit, then the first person's love will be unrequited and this gives minus points. The goal of the game is to get as many points as possible before time runs out.