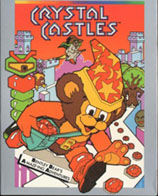 Atari released this isometric video game in 1983. The player uses a trackball and a jump button to control Bentley Bear as he collects gems along the paths of the castles. Wearing the magic hat allows Bentley to kill the Wicked Witch, Berthilda. Her gem eaters are vulnerable only while they are eating. Bentley can jump over the trees to stun them for a short time. Other enemies cannot be killed, so Bentley must avoid them. Secret warps take Bentley to higher levels.

A level ends when all the gems are collected. If Bentley gets the last gem, the player gets bonus points. Unlike most video games of the time, Crystal Castles actually has an ending

Bentley made an appearance as a playable character in Atari Karts for the Atari Jaguar. Afterwards Bentley seemed to disappear from existence barring Crystal Castles' appearance in a few compilations. Years later, a homebrew Fan Sequel in the form of a Platform Game for the Atari 7800 titled Bentley Bear's Crystal Quest from developer PacManPlus was announced. After some time in Development Hell, it was ultimately released on AtariAge's store in 2017.