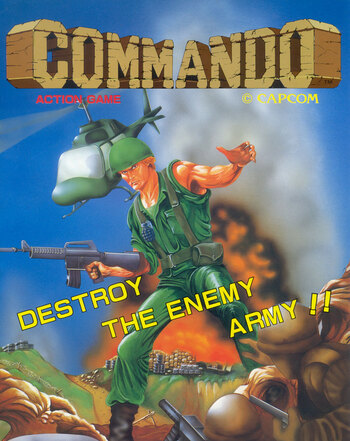 Commando (Senjou no Ookami, literally Battlefield Wolf) is a top-down Run-and-Gun game released by Capcom in 1985. Originally an arcade game, it was later ported to a wide range of game consoles, including the Atari 2600, Nintendo Entertainment System, Amiga, Commodore 64, Intellivision, and ZX Spectrum. In this game, you control a soldier (unnamed in the game, but identified as "Super Joe" in the promotional flyer) who is dropped off in a jungle and has to shoot and grenade his way through enemy territory.
Advertisement:

It had two sequels: Mercs (aka Senjō no Ōkami 2), released in 1989, and Wolf of the Battlefield: Commando 3, released in 2008. Both sequels featured cooperative play for up to three players.

Not to be confused with Ōkami, the similarly-named flash game series or the World War II strategy games. Or the Arnold Schwarzenegger movie.

Tropes used in Commando and its sequels: