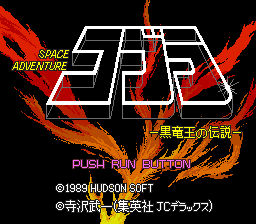 Cobra: Kokuryuu Ou no Densetsu (Japanese: コブラ・黒竜王の伝説; Translation: "Cobra: The Legend of the Black Dragon King") was developed and published by Hudson Soft Company, Ltd., and released in 1989.

Based on an original manga/animé series, this is a Japan-only release of the first part of space pirate Cobra's story, the second part being The Space Adventure.

Cobra is a brave renegade space pirate who fights the evil Pirate Guild and helps innocent people, cruising from planet to planet in his spaceship, aided by his trusty companion, the cyborg girl Lady. The adventure starts on a space station near the planet Eldo. The ancient civilization of this planet has long been destroyed, but the unusually beautiful light that surrounds the place attracts tourists from all over the galaxy. Cobra notices that a suspicious man watches his every step. Before long he realizes that his ship is under attack. Who is after Cobra? Will he be able to survive? That's what you have to find out!

"Cobra" is a Japanese-style adventure. You select commands from a menu (such as "Look", "Talk", etc.), thus interacting with people and objects. In certain places you can also move your character, viewed from third person perspective. being one of the first games to use CD ROM format, "Cobra" features animé-style cut scenes as well as voice-overs for some dialogues.