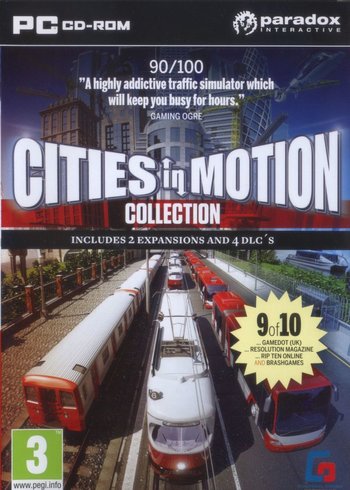 Cities in Motion refer to a pair of business management simulation games developed by Colossal Order and published by Paradox Interactive.

The goal of the games is to implement and improve a public transport system in various cities, both fictional and real-life. This goal can be achieved by building lines for metro trains, trams, boats, buses and helicopters. Players set ticket prices, hire inspectors to catch fare-dodgers, and please picky passengers. It's better than it sounds.

Cities in Motion was released in 2011, and initially had four European cities—Amsterdam, Berlin, Helsinki, and Vienna. The campaign spans from 1920 to 2010, and features situations such as divided Cold War Berlin. A large number of DLCs were released, mostly providing extra cities to play on.

Cities in Motion 2 was released in 2013, and changed gameplay significantly. Cities went from being built on a grid to being true 3D, a day-night cycle was introduced (requiring a change in the game's time frame; previously a game year lasted around 5-10 minutes, now a game day equals 24 minutes), scheduling was added, and the historical real-world cities were replaced by more generic, but larger, modern cities.

See also the later Cities: Skylines by the same developer.

Cities in Motion contains examples of: