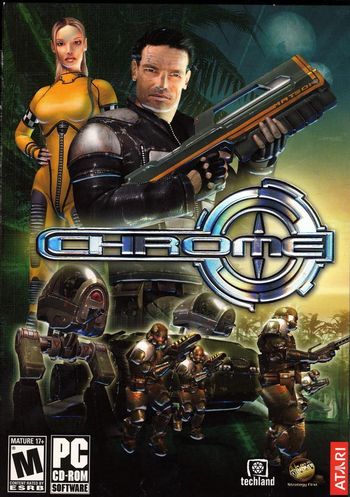 Chrome is a 2003 sci-fi First-Person Shooter for the PC developed by Techland, best known for their later releases like Call of Juarez, Dead Island and Dying Light. It was the first major release by Techland, and the "Chrome" name, after the game and their arguably first in-house game engine for this game, has been used in all of their major games since then with incremental updates to support new features and genres. A prequel, Chrome: SpecForce was released in 2005.
Advertisement:

The game focuses on the adventures of Bolt Logan (voiced by Jon St. John, best known as the voice of Duke Nukem), a space bounty hunter in the distant future. Partnering with a drifter/computer hacker named Carrie after his old Space Marine partner Pointer betrays him, Logan embarks on a series of bounty missions in a distant sector of colonized space, eventually being caught up in a power struggle between the Zetrox and Coretech Mega-Corporations over the valuable resource Chrome, a substance that makes terraforming human-habitable planets possible. The prequel, Chrome: SpecForce takes place during Logan's past as a member of the Space Marine special forces.

Both games were available on Steam but got pulled due to licensing issues. The fan-made HD patch to help the game run on modern systems is highly recommended.