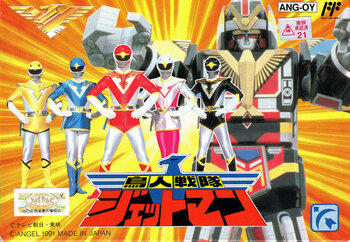 Choujin Sentai Jetman is a video game based off the Super Sentai series of the same name. It was released for Nintendo's Famicom in 1991. The game takes place over 5 areas (area 6 is available after winning the first five), you play through with one of the five Jetman and then with Great Icarus against the boss. It also features a "battle mode" allowing the player to battle the bosses of any of the first five levels.