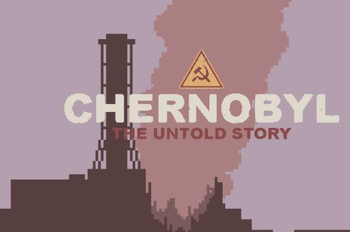 CHERNOBYL: The Untold Story is the third game by Mehsoft, the indie development team led by the Russian Let's Play personality Maddison. It was released for PC through Steam on September 24th, 2019.

The game is a peculiar Adventure Game/Rail Shooter hybrid, where the player first wanders around the Pripyat exclusion zone as a supposed liquidator in 2D isometric view while discovering collectables and reading the narration about daily life in the USSR (quoted directly from various anti-Soviet blogs in Russia). They begin the game with a list of places of interests like the school or the swimming pool, and once they get there, the game shifts to a First-Person Shooter mode (with faux-3D graphics much like in the Build engines shooters such as the original Doom) and they have to shoot the people who lost their sanity as the result of radiation exposure and now attack the player in waves.

It is not directly related to HBO series Chernobyl: however, it was created in response to that series, or rather the controversy it arose within Russia. It is definitely not related to another 2019 game set in and around Chernobyl, Chernobylite.