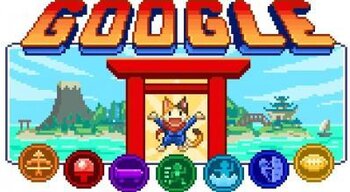 is a Google Doodle Gamenote a Google Doodle is a piece of art, video, game or other media that replaces the usual Google logo in the browser made in partnership with Tokyo-based animation studio, Studio 4°C. It is based heavily on Japanese mythology and culture and was created for the Tokyo 2020 Olympic Games.
Advertisement:

The game follows the story of Lucky, a calico ninja cat participating in the titular Champion Island Games held on, where else, Champion Island. To win the games Lucky must defeat the champions of seven sports: Archery, Table Tennis, Skateboarding, Marathon Running, Artistic Swimming, Climbing and Rugby. Along the way she'll also end up assisting the locals with their various problems from helping unblock hot springs to inspiring an Oni to follow his dreams of being a baker.

The game also features an online component in the form of a scoreboard that keeps track of four teams, one of which you will join at the start of the game.