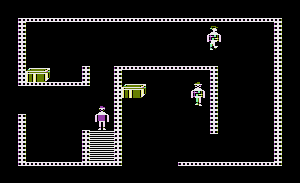 Solid Snake's grandpa at work.
Welcome to Castle Wolfenstein, mate! The Nazis brought you here to get information out of you before they kill you. That's what this place is for — if you listen you can hear the screams. They've already worked me over and I'll never get out alive, but maybe you can with this gun. It's standard issue — each clip holds 10 bullets, and it's fully loaded.

Be careful, mate, because every room in the castle is guarded. The regular guards can't leave their posts without orders, but watch out for the SS stormtroopers. They're the ones in the bulletproof vests and they're like bloody hounds. Once they've picked up your trail they won't stop chasing you until you kill them and you almost need a grenade to do that.

Castle Wolfenstein is full of supplies too. I know one chap who found a whole German uniform and almost sneaked out past the guards. He might have made it if he hadn't shot some poor sod and got the SS on his trail. If you can't unlock a supply chest, try shooting it open. Now I wouldn't go shooting at chests full of explosives…

One more thing. The battle plans for Operation Rheingold are hidden somewhere in the castle. I'm sure you know what it would mean to the Allied High Command if we could get our hands on those…

They're coming for me! Good luck!

Castle Wolfenstein (1981) was a computer game written by Silas Warner for the Apple ][, IBM home computers, Atari 8-Bit Computers, and the Commodore 64. It is regarded as one of the first stealth-based games ever, and began the long-running Wolfenstein series.

The player is an unnamed U.S. soldier during World War II; he has been captured by the Nazis and imprisoned in Castle Wolfenstein. When the game starts, he has managed to get a gun and ten bullets from a dead cellmate. Once the player starts moving, he attracts the attention of the guards, who will try to shoot or apprehend him. The player's objective is to avoid being captured or killed, find the secret war plans, and escape alive. The player can wear uniforms to sneak past (some) guards, ambush patrols, and find helpful items such as keys, food, drink, bullets, grenades, and bulletproof vests. The game is played with Three-Quarters View.

The success of Castle Wolfenstein prompted a sequel, Beyond Castle Wolfenstein (1984). In this game, the player must infiltrate a secret Berlin bunker where Adolf Hitler is holding secret meetings; he must find a bomb hidden somewhere inside the bunker, plant it in Hitler's meeting room, then escape before the bomb explodes.

The Castle Wolfenstein games provide examples of the following tropes: