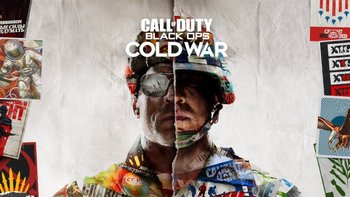 Кто я? Что я? Я не помню, не знаю...note Who am I? What am I? I don't remember, I don't know...
"Gentlemen, you've been given an important task: protecting our very way of life from a great evil. There is no higher duty, there is no higher honor. And while few people will know of your struggles, rest assured the entire Free World will benefit."
— Ronald Reagan
Advertisement:

As the sub(-sub)-title might suggest, the game returns to the Cold War, in particular 1981 during the presidency of Ronald Reagan, serving as an interquel between the first and second Black Ops games.

After Call of Duty: Black Ops 4 skipped having a campaign to focus on Blackout, Cold War returns to having one. You play as "Bell", a US black ops soldier who joins Alex Mason, his ol' buddy Frank Woods, and CIA agent Russell Adler to stop a Soviet agent codenamed "Perseus" from destabilising the United States and shift the balance of the Cold War.

Alongside the campaign and multiplayer

, Zombies returns with a soft reboot of the Aether storyline, now known as Dark Aether. Cold War did not come out with its own Battle Royale gamemode, instead offering various bits of media into the previous year's iteration, Call of Duty: Warzone.

", which included a crossover with both Rambo and Die Hard with John Rambo and John McClane as playable characters and Nakatomi Plaza as a POI in Warzone. For the Halloween season, it hosted another "Haunting of Verdansk" complete with a playable Ghostface (with Roger L. Jackson reprising his role) and a Frank the Rabbit skin for Baker.

Know your tropes, or be doomed to repeat it:

open/close all folders
# through D
E through I
J through N
O through S
T through Z
"I know you won't fail us."