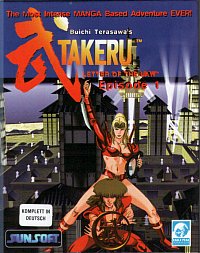 Created by artist Buichi Terasawa, published by Eagle Peak Interactive Corporation, developed by Network Entertainment, and released in 1996, Buichi Terasawa's Takeru: Letter of the Law is a full-color computerized interactive adaptation of the 1993 manga. Follow the hero Takeru Ichimonji in his battle against an evil sorceress in the land of Yamato, sort of an amalgam of feudal and futuristic Japan.

Interaction consists of scrolling the mouse to uncover voice-over and action events, making choices that affect the direction of the story arc, and a few object-based puzzle games. Three chapters of the comic span 2 CD-ROMs, with over 50,000 frames of digital animation. Features a fair amount of violence and, of course, scantily clad female characters.

As it is a straight adaptation of the manga, all the tropes from its page apply here.