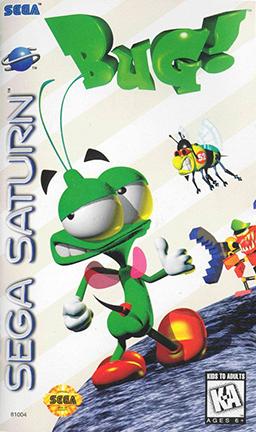 He may be small, but he's a big pain for his enemies!
"He shoots, He scores!"
— Bug, when killing an enemy
Advertisement:

Bug! is a video game developed by Realtime Associates for the Sega Saturn. Released by Sega in 1995 in North America, Japan and Europe, it was one of the earliest 3D platform games and the first 3D Sega Saturn game. It was later released for Windows 3.x and Windows 95 on August 31, 1996 by Beam Software, on one CD that contains both versions of the game.

Bug, an actor in Hollywood hopes to make his "big break", and has signed a deal for the lead role in an action film (named "BUG!") in which his girlfriend and family are kidnapped by a black widow and must rescue them while facing off against cartoony bugs and other nasties.

Bug! is played like a traditional side-scrolling adventure title, including the way to defeat enemies by jumping on them. What sets Bug! apart is the game's 3D levels, which take the side-view and tweak it- it allowed players to move in all directions, but it did not allow movement along more than one axis at once — the player could move left to right, or forward and backward, but not diagonally left and backward at the same time.

Players can pick up two powerups to give Bug new forms of attack — the Zap Cap and the Spit Wad. You also collect blue crystalline sugar cubes which help you qualify for a "Dragon Ring Chase" bonus round.

The game did well enough to get a sequel, which was called Bug Too! In it, Bug gets two new co-stars to work with, Superfly and Maggot Dog, and their agent signs them up to work on a six-flick deal consisting of the movies Weevil Dead 2, Lawrence of Arachnia, Antennae Day, Flea-Wee's Big Adventure, Swatterworld, and Cicada Night Fever. The catch: all of the shots have to be completed in one day.

open/close all folders
Bug!
Bug Too!