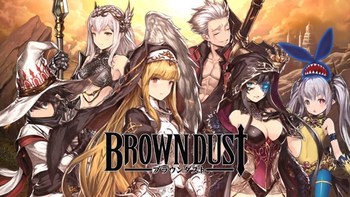 Brown Dust is a Korean Free-to-Play mobile RPG, published by Neowiz Games for both iOS and Android. It officially launched globally on March 7th, 2019.

Fabian, known knight and noble loyal to the Emperor, shocked the world as he turned traitor, alongside six nobles in his rebellion, later known as the Six Devils. Against a grueling warfront and countless enemy soldiers, Fabian reaches Emperor Altair and kills him. The story of the murder is declared as "The Day of the Eclipse." You play as the son of Fabian, masquerading as a leader of a mercenary band, in order to find out the whereabouts of your father, and what truly caused his to turn traitor.

In battles you place your mercenaries on a grid, where they take turns either attacking, charging their spells, or buffing allies depending on their order. Fights are largely automated, some attacking the enemies in their row directly, attacking those in the back, or attacking in a pattern.