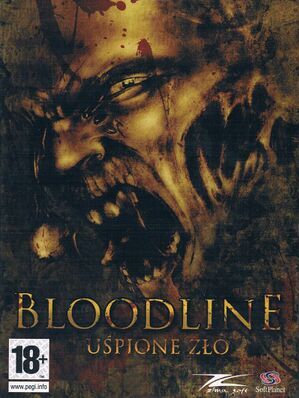 "Ignorance is light falling into oblivion in the world of darkness...
...Oblivion is sense amidst fog...
...Fog is the fear of unknown hiding in shadow...
...Fear is the pain which burns the soul...
...Pain is the death that screams from afar...
...Death is the line of blood, which dribbles out of the past, intertwines with the present and drags into the future...
...And nobody is in power to stop it..."
— Jim Card
Advertisement:

Bloodline is a Czech horror action/quest game released in June 2005 by Zima Soft. The story is set in late 1960s and focuses on Jim Card, a former patient of a seemingly abandoned mental hospital in the middle of nowhere as he awakens with a severe amnesia and discovers he's not quite alone there. The gameplay combines elements of FPS and quest, having players to solve puzzles as they progress towards revealing what really happened in the hospital.

The game did not earn much popularity after the release, part of the reason being the conditions of the game's development, which in their turn affected the game's quality in a catastrophic way. As the result, it was berated by both professional reviewers and players, and sank into oblivion quickly.