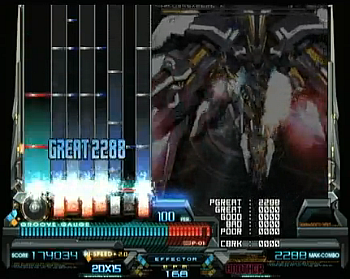 You are the DJ. Hit the key. (All 2626 of them, in 2 minutes) note Thankfully, this is just on autoplay mode.
A real-time dance music game hard and extreme. That's beatmania!! It's too cool!
— Official tagline
Advertisement:

beatmania is a popular Rhythm Game developed by Konami as a part of their BEMANI games. Considered by many to be one of the forerunners of the modern music game. Of course when they realized how popular the arcade version was, Konami would milk the genre for all its worth with spin-offs (involving dance, drumming, smacking colored buttons, and slapping a grid of buttons), and an endless assortment of Mission Pack Sequels and reboots.

Originally described as being a "DJ simulator", the basic game is simple; players are armed with a piano-styled keyboard and turntable, and must press keys or scratch the turntable when notes cascade down the screen corresponding to them. This fills up a Groove Gauge; if the gauge finishes above a certain threshold, you pass, it's just that simple. But, when you look at harder songs though, it's also anything but. While earlier versions primarily focused on hip-hop, house, and techno music, the latest installments have featured almost every single genre imaginable, especially hardcore electronica in various forms.

There have been three major incarnations of the game:

beatmania IIDX is still popular in Japan, with releases in select other Asian countries such as South Korea, Taiwan, and Singapore, and still tops charts of highest-grossing arcade games in Japan, with no end to the series in sight.note Even the infamous Konami scandals of 2015 didn't slow it down much, as IIDX is an arcade game handled by Konami Amusement; most of the sabotaged properties were consumer-software series made by Konami Digital Entertainment). That said, the problems with Konami caught up with BEMANI in 2017 with the "BEMANI Sound Team" controversy, but even that did not affect IIDX game production much, at least from what can be seen. Several North American versions were attempted a couple of times, including a PlayStation 2 release as just beatmania (based on the 9th Style engine, which featured 5-key and 7-key as separate modes rather than just a modifier) and a beta build of an English version of Gold that was location-tested for a brief period of time. An official American release of IIDX finally happened in 2020.

Compare pop'n music (basically a Lighter and Softer spinoff with large buttons), EZ2DJ (very similar concept, to the point where Konami sued the publisher), and DJMAX (another keysounded "DJ sim" game, made mainly for home platforms).

The beatmania series provides examples of: