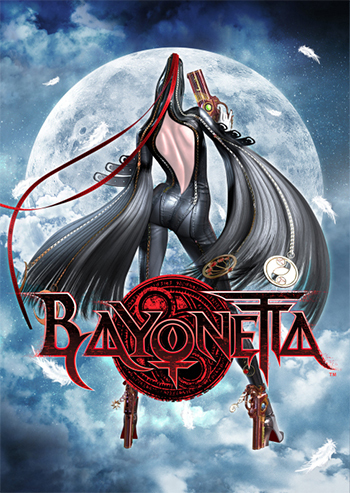 Bayonetta is a third person Stylish Action hack and slash game developed by PlatinumGames in the style of Devil May Cry, Ninja Gaiden, and God of War, starring the title heroine, a badass witch who wears her hair as her clothes, her guns for her shoes, and has a fathomless fondness for camp.

For millennia, history was overseen by two clans of magicians: the Lumen Sages and the Umbra Witches. Five hundred years ago, the clans erupted into a civil war that ended in the annihilation of the Sages. Not having enough time to recover from the battle, the Witches were quickly hunted to their own extinction by the combined forces of the angelic Laguna of Paradiso and the crazed townspeople of Earth. Twenty years ago, Bayonetta, the (almost) last of the Witches was awakened from a magical coma, and was immediately set upon by the bloodthirsty Laguna. Thankfully her pacts with the demons of Inferno still stand, so she uses her dark powers to hunt the angels down.

Waking up from a five-hundred year sleep left her with no idea who she is, so she travels to the European city of Vigrid, whose spiritual make-up is getting uncomfortably close to that of Paradiso. There, she hopes to find the mysterious "Right Eye," the other half of the "Eyes of the World" brooch she possesses. There she meets another Witch named Jeanne who seems to know more about Bayonetta than herself, an Intrepid Reporter named Luka who has a long-lived grudge against her, and a seemingly lost little girl named Cereza. Her memories return progressively as she proceeds through the city while kicking a lot of ass.

The original game got an Updated Re-release in 2014 for the Wii U, coinciding with the release of its sequel Bayonetta 2.note First-run physical copies of 2 came with the first game, with the digital versions of both games being available as a discount if bought with the other. It received a PC port via Steam on April 11, 2017. A Nintendo Switch version alongside Bayonetta 2 on February 16, 2018. It was also released with Vanquish on the PlayStation 4 and Xbox One on February 18, 2020 in a 10th anniversary launch bundle.

Starting with the Wii U exclusive Bayonetta 2, Nintendo began licensing the series from Sega, funding the development of and serving as publisher for all future installments of the franchise. A third game, Bayonetta 3, was released exclusively for the Nintendo Switch on October 28, 2022. A spin-off prequel, Bayonetta Origins: Cereza and the Lost Demon, is scheduled to release on March 17, 2023, also for the Switch. This partnership with Nintendo (and a fan-poll) also led to Bayonetta joining the roster of the Super Smash Bros. series, becoming the last DLC fighter for Super Smash Bros. for Nintendo 3DS and Wii U and returning in Super Smash Bros. Ultimate.

Not to be confused with Bullet Witch. It has nothing to do with Bayonet Ya either.

When it comes to fighting with style, few can match Bayonetta's level of flair.

When it comes to fighting with style, few can match Bayonetta's level of flair.