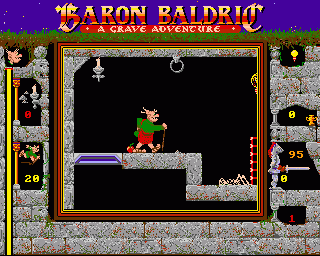 Baron Baldric, a platform side-scrolling action game, is quite known among Apogee fans - but the main character, Baron Baldric, was later reused for an isometric game and sequel called Mystic Towers. It is considered very rare since the registered version was only sold in the Australian territory.

The story behind Baron Baldric: A Grave Adventure AKA Baron Baldric: A Grave Overture takes place under Castle Pedabouch. You have to search for the family treasures in the tomb: it was told that, centuries before, Baron Baldric's ancestor, Baron Lazarus Pedabouche studied an evil Wolf-Magic and turned into a cruel tyrant: fortunately, when he seized Rosie, a local milk-maid, he was stoned to death by his own subjects. Rosie died too, and was doomed to haunt the whole castle until the ancient baron was slain.

The game is somewhat similar to Impossible Mission 2 and the earlier Montezuma's Revenge because of many elements bringing the game far from the action genre. You have to find flints to light lamps when they go out, and regularly eat food to survive the maze.