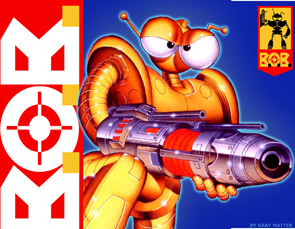 B.O.B. is a Platform Game published in 1993 by Electronic Arts. It was originally developed for the Super Nintendo Entertainment System by Chris Gray Enterprises (aka Gray Matter) and ported to the Sega Genesis by Foley Hi-Tech Entertainment.
Advertisement:

B.O.B. is a teenage android trying to make a blind date. Unfortunately, his car crashes on a weird planet full of hostile creatures. B.O.B. carries a gun arm that can carry up to six kinds of ammunition, and various kinds of remotes useful for getting through tricky spots.

No relation to the Sitcom Bob! or to the rapper B.o.B.