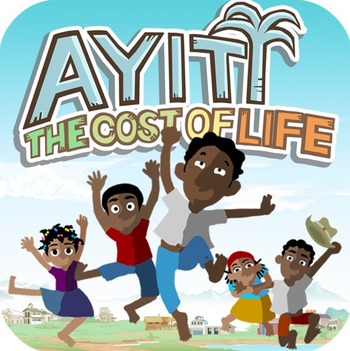 Ayiti: The Cost of Life is a Web Game created by Global Kids and Gamelab in October 2006, and available on their website as well as several others. It was later ported to iOS as well.
Advertisement:

It focuses on the Guinard family, living in rural Haiti, and tasks the player with trying to keep all five family members alive and to improve their lot over a four year period. The five family members are Jean Guinard, his wife Marie, their sons Patrick and Yves, and their daughter Jacquline. This family faces risk from disease, bad weather, and even potential violence, but with luck and careful planning they can survive and even prosper.

Ayiti: The Cost of Life'' provides examples of:

in the United States, will send money to you. It's usually not much, but it can make a big difference.