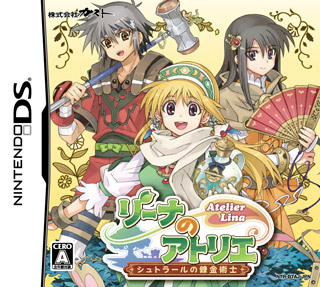 JP Boxart
The last game in the Atelier series for the Nintendo DS console, released in December of 2009.

Atelier Lina starts off with Lina, an alchemist who just received her state alchemy certificate, returning home to show it to her childhood friend, Luon. As she's returning home, however, she comes across a tree on fire... which turns out to be the home of a clan of fairies. And, upon seeing Lina at the scene, the fairies assume she's responsible. Thus, Lina is left with little choice but to travel across the country, using her newfound alchemic skill to earn enough to help the fairies rebuild their home... and just maybe track down who's responsible for this mess in the first place.