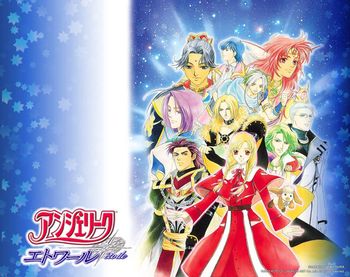 The cast of Angelique: Etoile.
Angelique is a series of Dating Sims developed for girls. It is often credited as the creator of the genre of Otome Games. It is largely unknown outside of Japan but has spawned a manga series, 4 OVAs, two television series and a bunch of Drama CDs and assorted merchandise.
Advertisement:

It has also spun off into the Neo Angelique series (which has its own page).

The software games in the series are:

The games take place in a Utopian cosmos ruled by a queen who is supported by nine hot and single young men with power over the nine elements or "Sacrea". The first game starts with the current queens powers beginning to fade. To determine which of two girls is better suited for the job, an examination is started in which both candidates must cultivate a continent on a new planet. However the player can choose to abandon becoming queen to fall in love with one of the guardians leaving the other girl with the queen gig.

The second game started with a new cosmos forming which also needs a queen and played similarly to the first. Angelique Trois and Angelique: Heaven's Requiem involve Angelique Collet first being drawn into a pocket cosmos which she also needs to develop and fighting off an evil Emperor from a third dimension who is attacking Angelique Limoges initial cosmos. Finally, Angelique Etoile involves a new girl, Ange, who is the legendary Etoile destined to save both realms and who needs to recruit nine new guardians for Angelique Collet's cosmos.

The story expands in later titles, but most entries in the series feature one of a succession of girls named Angelique as the protagonist, with ever larger casts of characters. The roster of potential love interests swells to 19 characters in later titles.

Other series in the franchise