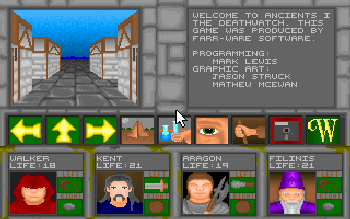 Ancients 1: Deathwatch is a first-person, Medieval/Magic turn-based RPG for the PC. Version 1.2 was released as shareware in 1991, developed and self-published by Farr-Ware. Version 2.0 was later published by Epic Games on August 12 of 1993. The game was programmed by Mark Lewis, and its graphic art was created by Jason Struck and Matthew McEwan.

Players are told that during their youth they got lost while exploring the wilderness surrounding their home city of Locklaven. They were rescued by a beautiful harp playing fairy who put them into a magically enchanted sleep and teleported them back home. Years later, after having done much travelling, the player returns to Locklaven and becomes aware of a new great evil, and suspects that the fairy who saved them has been kidnapped.

There is a sequel titled Ancients 2 Approaching Evil.