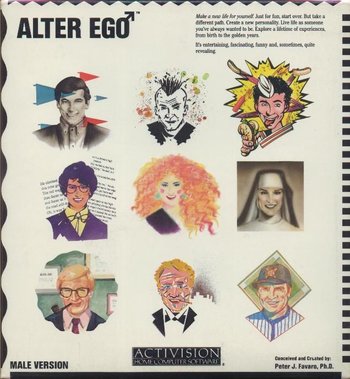 Alter Ego is a part Role-Playing Game, part life simulator released for Apple ][, Commodore 64, DOS and macOS and created by Activision in 1986. It was first released with a male version and later re-released with a female version. The game is all about you and how you live your life, making decisions that will make or break you as you grow up. The game begins with a personality test featuring a series of true and false questions to make up your personality. Afterwards, you will constantly make decisions of how you feel or act to scenarios, starting from your birth and continuing off through your Infancy, Childhood, Adolescence, Young Adulthood, Adulthood, Middle Age and Old Age chapters of your life. The goal is to live your life as long and as fulfilling as possible, although it certainly doesn't stop you from trying to off yourself as early and painfully as possible.

You can play the original version here