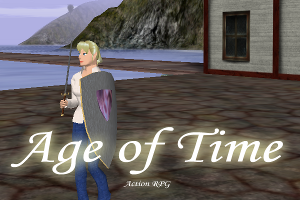 "'Barbie horse adventure' is a fair description. Except you can kill the horses. And other people. And arrest people and beat them while they are in jail. And blow them up with dynamite."
— Badspot
Advertisement:

Age of Time is a free, multiplayer, persistent-world fantasy action-adventure game by Eric "Badspot" Hartman, the creator of Blockland.

The game is known mainly for having only female player models, and for having not been updated in over a decade.

Do not confuse this AOT with Attack on Titan or Airports of Thailand.

Age of Time contains examples of: