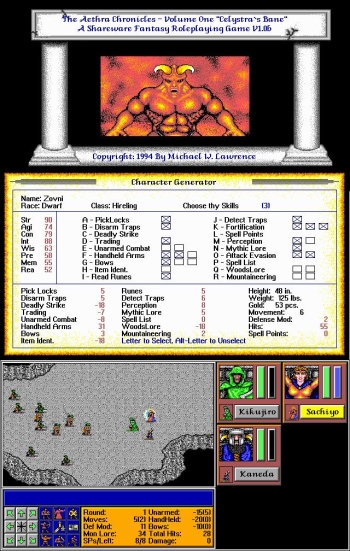 Intro sequence, character creation, and combat
Aethra's Chronicles is a shareware fantasy RPG for MS-DOS, with rules influenced heavily by Role Master. It is available for free on websites that carry lots of shareware MS-DOS games. And, for an MS-DOS game, it has very few bugs!
Advertisement:

The Aethra Chronicles is an atypical Fantasy Role-Playing game. You will create several characters choosing from twelve different classes and five different races. The object of the game is to stay alive and advance your characters in levels while completing various quest which will be made known to you. The Aethra Chronicles is shareware and is free to try out. Please fell free to play the shareware version as long as you like. The shareware version however is not the complete game. [Relative to the grander plans, anyhow.] The shareware version is what we call chapter one "Book of Prophecy". Those who register the game will receive chapters two and three. [Actually, you won't, and that's if it is even possible to register the game anymore.] I hope you will agree with us that this game is one of the finest shareware games in its class. [Mostly by virtue of being one of the only shareware games in its class.] However unless we get support from the users [we] will not be able to continue with this type of work. [Indeed, sequels were never made.]

The story begins with your father accused of kidnapping the king's son and imprisoned. The king's vizier, however, knows that your father is innocent and sends you on a quest to hunt down the real culprits. More detailed gameplay info can be found here

while a walkthrough is here.