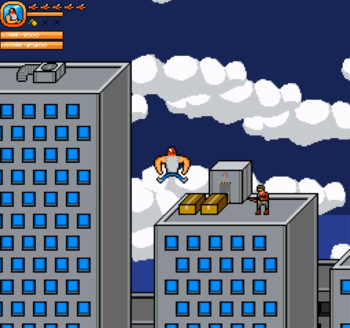 Once Upon a Time, there was a little fish named Fishbo. He lived in the ocean just of the coast of Northern California. He lived happily in the ocean, each day was another great day and he lived life to the fullest with all his fish buddies. One unfortunate day, a massive business arrived on the shore. Almost as soon as construction was finished, massive amounts of chemical waste was poured into the ocean. The waste polluted the water, destroying Fishbo's home, and killing all of his fish buddies. Instead of meeting the same fate his friends did, he became mutated by the waste. He became a massive, muscular fish-headed human! He knew what he had to do; He was gonna fight Corp Inc. and avenge all of his friends under the new name "Action Fish".
—Opening Narration
Advertisement:
Action Fish is a freeware Bullet Hell Platform Game for PC. Its development was for a national video game development contest in 2017, for which the theme was 1980's arcade game. The game is available here

It tells the story of a fish named Fishbo living in the ocean. His day to day activities were fine until a company named "Corp Inc" arrived. Apparently, right after construction, they dumped radioactive waste into the ocean, killing off Fishbo's friends and destroying his home. However, he alone mutated into a muscular, fish-headed human and went after Corp Inc and their boss "The CEO" to avenge those that he held dear and his hometown under the alias, Action Fish.

Compare Super Mario Bros. and I Wanna Be the Guy.

Tropes that apply to Action Fish (This is still under construction)