Video Game / A Valley Without Wind 2 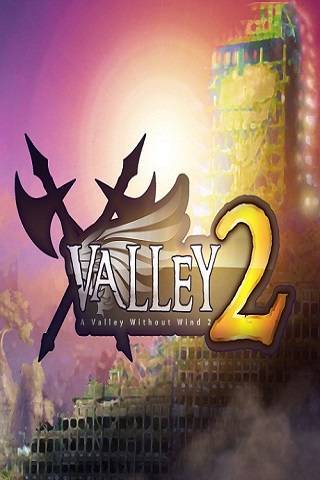 The land of Environ is under siege from the evil overlord Demonaica. People who had played the original game may think this isn't a big deal, but there's one tiny problem: Demonaica and his lackeys have an Oblivion Crystal, an Artifact of Doom that give them Complete Immortality, rendering any sort of resistance against them useless.
Advertisement:

Enter the Protagonist. He or She has entered into Demonaica's ranks, and through all sorts of training and cruelty, has gained the trust of thier evil peers and the Overlord himself, enough to have an Oblivion Crystal bestowed upon them. With this, s/he immediately slips out of the castle via an air vent, and begins to lead a resistance against the Overlord now that they are on even footing, with the ultimate goal of destroying the source of the Oblivion Crystals' power and defeating Demonaica.

The gameplay of the game can best be described as a combination of a Metroid Vania game and a TBS game — Actraiser is probably the closest comparison. You have to manage your resistance fighters on the overworld map to make sure they can continue to fight. If all of your resistance fighters die, you immediately lose. In the action stages of the game, you need to destroy Storm Generators to move further into the Fog of War, raid Robotic Research Facilities to obtain new abilities, find and explore Level Up Windmills to do exactly that, and routinely visit Demonaica's Castle to steal new spellbooks.

The game relies a lot of random generation of game aspects. It changes the world every time, it changes the distribution and power of spells (there are 50 different spellbooks, and the power of the 25 chosen is randomised — Weak Tier 1 spells in one game could be extremely powerful Tier 5 spells in another), and the general level designs can be randomised to an extent.

A Valley Without Wind 2 provides examples of: