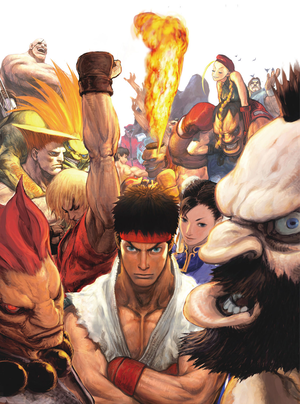 While not the first Fighting Game by any stretch, Street Fighter II was the one which codified the genre and its related tropes, more notably the Shotoclone. It invented the fighting game definition of combos, which quickly became a staple of the genre. Fighting game-style combos later crossed over into other genres of games.

Its success spawned countless copycats, from Art of Fighting (developed by Capcom's rival SNK and featuring the Ken lookalike Ryo), to the mostly-forgotten Fighter's History (Capcom tried and failed to sue Data East for infringement) and World Heroes, to bald-faced ripoffs like the creatively-named Super Fighter (not to be confused with the Newgrounds game).