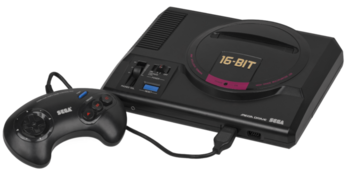 After the Sega Master System failed to make a dent on the NES/Famicom, at least in North America and Japan (it did okay in Europe and South America), Sega decided to just top it. Nintendo were complacent with their success and dragging their feet on developing a 16-bit system, which was the arcade standard at the time. They were already being impacted in Japan by the sudden success of NEC's PC Engine (TurboGrafx-16 in the West) which, while not actually 16-bit, was a noticeable technical improvement from the Famicom, which was underpowered even for its time. Thus, Sega decided that they would beat Nintendo to the punch with a console based on their System 16 arcade board (codenamed "Mark V").

Enter the Sega Mega Drive or, as North Americans refer to it, the Sega Genesis,note It was commonly believed that the name change was because "Mega Drive" was already trademarked in the U.S. by Mega Drive Systems, Inc., a manufacturer of hard disk drives. In actuality, according to the 2014 book Sega Mega Drive Collected Works by Keith Stuart, it was Sega co-founder David Rosen

who wanted the name change because he disliked the name "Mega Drive" and wanted the console to represent "a new beginning" for Sega. released in 1988 in Japan, 1989 in North America, and 1990 elsewhere.

What made this console such a hit in the West was a shift in Sega's target audience early in its lifecycle. During the Master System era, Sega made a grab for the same kiddie demographic as Nintendo. The Genesis/Mega Drive initially did the same, as evidenced by their original mascot platformer Alex Kidd in the Enchanted Castle, a sequel to the Master System's Alex Kidd in Miracle World. However, Enchanted Castle was a severe critical and commercial failure, especially in western countries.

What really captured the public's imagination instead was Altered Beast, a hastily-made but fairly-accurate port of Sega's arcade hit which came bundled with most of the consoles. A few months later, the system had its first standalone hit, Michael Jackson's Moonwalker, adapted from the 1988 film of the same name and driven by the sheer star power of its lead figure at the time. It was obvious to Sega that they weren't going to get anywhere trying to appeal to Nintendo's audience, and that the answer lay in the burgeoning demographic of teens and young adults with disposable income. Many early titles had complex gameplay and/or nightmarish imagery one wouldn’t expect of any other console game. The kerfuffle with EA would also wind up paying dividends, as the Genesis version of John Madden Football attracted sports fans to the system and gave the console another edge over the NES.

Sega gathered the minds behind Alex Kidd and tasked them with coming up with a replacement mascot who could appeal to this older audience. The design process was lengthy and involved extensive market research, on-the-street interviews and polls, some of them conducted in the United States. In the summer of '91, they finally managed to come up with a Killer App known as Sonic the Hedgehog. The following year's sequel, Sonic 2, was even more successful and cemented Sega as a force to be reckoned with in the console market. Its biggest breadwinners ended up being their family-friendly fare, namely the Sonic series and Virgin's Aladdin. The Mickey Mouse game Castle of Illusion was another early hit for the console, and there were plenty of other E-rated and below exclusives coming down the pipe, like a Barney the Dinosaur edutainment game and Treasure's McDonald's Treasure Land Adventure. (The latter has no business being as good as it is.) The Genesis/Mega Drive sold 40 million units, with miniaturized versions and handhelds still on the market today.

Although the Mega Drive flopped in its home country, which was already embroiled in a war between the Famicom and the PC Engine, Sega of America's and Sega of Europe's adept marketing broke Nintendo's stranglehold on the Western market (while the TurboGrafx-16 was squeezed out of the market by both competitors there), redefining the landscape for both companies and consumers and giving the Big N its first real competition in the home console business, the Genesis also got success in Europe thanks to European-heavy I Ps at that time. Nintendo eventually deployed their own 16-bit console in the form of the Super NES/Super Famicom.

After the roaring success of Donkey Kong Country and the Super FX chip powering Star Fox and Super Mario World 2: Yoshi's Island put the SNES over the top, Sega were spooked into green-lighting Sonic 3D: Flickies' Island and Vectorman, along with a console port of Virtua Racing. The latter came with the Sega Virtua Processor, Sega's own take on the Super FX chip, which allowed for more-complex polygonal rendering. It was in fact more powerful than the Super FX chip. Virtua Racing also happened to be the most expensive cartridge ever produced for the console, and the disappointing sales convinced Sega's marketing department that there was no future in it.

Power Base Converter: Also known as the "Master System Converter" in Europe and as the "Mega Adaptor" in Japan. An add-on which allowed the console to play all but a very select few Master System gamesnote It cannot play games that use the Master System's special video modes like F-16 Fighting Falcon or use its Japan-only FM chip. It also cannot play SG-1000 games., either of the cartridge or the card variety, and included support for the SMS's SegaScope 3D glasses. The add-on was designed around the form factor of the original model of the Genesis, so it doesn't work with most revisions other than the second model (and even then the original Convertor had issues, so a new convertor was issued, albeit in Europe only; that version also lacked card support). It also won't work with a 32X unless it is modded.

Mega Modem: A modem created by Sunsoft that allowed the console to connect to the internet via telephone lines for online play and gave access to the Meganet service. Only released in Japan, though an American launch under the name "Tele-Genesis" was planned. The modem was slow even for its time period, difficult to use, and online play was extremely limited, supporting very few games.

Sega CD/Mega-CD: A CD-based add-on which would allow it to take advantage of a higher-capacity storage medium, enabling features such as Full Motion Video and Red Book CD sound. Unfortunately, the Genesis'/Mega Drive's own processing power wasn't quite enough to take advantage of these features to the fullest. Commonly believed to be a flop, the add-on actually sold well enough to be incorporated into some models of the console (the JVC Wondermega/X'Eye the CDX/Multi-Mega), though it never found the sort of popularity that NEC's CD add-on for the PC Engine did in Japan.

Sega 32X: Originally conceived as the "Neptune", a cartridge-based 32-bit system to go along with their second CD-based system, the Sega Saturn. The add-on boasted two 32-bit processors and primitive 3D graphics capabilities, and was marketed as an opportunity for consumers to get a head start on the 32-bit generation. Unfortunately, both consumers and developers saw that the superior Saturn was just around the corner—although Sega deluded themselves into believing the 32X and Saturn could co-exist, with casual gamers gravitating towards the cheaper 32X while the Saturn was reserved for the hardcore crowd. Titles for the add-on were few and far between, and many of the games that were released ended up Christmas Rushed. Some earlier CD games were also re-released on the 32X to take advantage of the system's improved processing; those games require both the 32X and CD accessories to be present to be playable. Madness.