"Once we strike, I will run wild for six months to a year. After that, I have no guarantee of success."
Admiral Yamamoto, shortly before the attack on Pearl Harbornote And the reversal of Japanese fortunes, the Battle of Midway, would occur almost six months to the day after Pearl 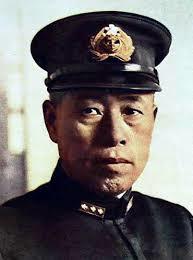 Isoroku Yamamoto (山本 五十六 Yamamoto Isoroku, April 4, 1884 – April 18, 1943) was a leading admiral of the Imperial Japanese Navy. He was responsible for their strategic direction which culminated in the attack on Pearl Harbor and the Battle of Midway.

Like many officers of Japan, he spent a considerable amount of time in the United States, having gone to Harvard and serving as a naval attaché in Washington. Because of this, he was well aware of the great industrial potential that America had and correctly knew that they would be able to outproduce Japan if the two nations went to war.note And America did outproduce Japan. In one year, from 1943 to 1944, the US Navy commissioned more ships than the IJN had in their entire seventy year existence.

In 1941, the United State decided to take action against Japan's aggressive expansionist policies in China. They cut off all oil and scrap metal trade with the resource-poor islands, leaving the Japanese with an eighteen month supply of oil. The General Staff decided they would need to seize the oil-rich Dutch colonies of the South Pacific but feared the US Pacific Fleet, which had recently relocated to Hawaii as a sign of American power. Though, as mentioned above, Yamamoto believed that Japan would inevitably lose a prolonged war against America, the honor-bound officer was obliged to agree.

His strategy would involve crippling the Pacific Fleet while at anchor at Pearl Harbor, leaving the IJN free to seize much of the Pacific before America could recover. After that, he would need to turn the Pacific Fleet into a decisive battle to buy more time or force America to a negotiated peace. Although the attack on Pearl crippled the Pacific Fleet's battleships, well beyond their most optimistic projections, the American carriers were not in port. Thus, America was forced to depend on these vessels, which, coupled with the fact that the Japanese did not target Pearl's shore facilities and oil storage (allowing the remnants of the fleet to maneuver immediately), resulted in the utter decimation of the Japanese fleet at Midway.

After Midway, the Japanese were forced onto the defensive. Despite the loss of their carriers and veteran air crews, the IJN was still a formidable force. Yamamoto himself went to Guadalcanal to oversee operations against the American Marines. In April 1943, his transport airplane was intercepted by American fighters and shot down, providing America a much-needed vengeance for the attack on Pearl Harbor.