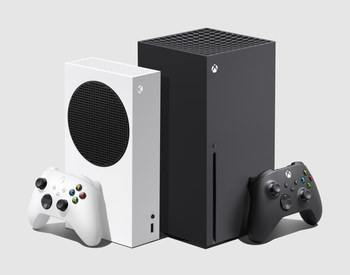 The Xbox Series X and Xbox Series S, collectively referred to as Xbox Series X|S, are two consoles representing Microsoft's entry in The Ninth Generation of Console Video Games. They are the fourth generation of the Xbox console family, following their third console line, the Xbox One. Of the two, the Series X is the more powerful, premium console, while the smaller, less powerful Series S is value-oriented and can only play digitally downloaded games. Both consoles were released on November 10, 2020.

Similar to the PlayStation 5, the Series systems take advantage of a Solid State Drive for storage to enable significantly faster load times. The systems also have a new Quick Resume feature, allowing multiple games to be paused and exited while letting you open another without losing the game state of the other games. Quick Resume even saves the game state if the console is turned off.

The Xbox Series line of consoles supports all games playable on the Xbox One, including backward compatible original Xbox and Xbox 360 games. The only exception to this are games that require Kinect, as the new consoles do not support the peripheral. As a bonus, all backwards compatible games benefit from the increase in power and the internal SSD - performing better and loading faster as a result. For example, Grand Theft Auto IV, a 360 game with rough performance even on the One X, runs at a near flawless 60 frames-per-second on the X|S. While some games are limited in what improvements they benefit from due to framerate or resolution caps that were placed in there with the Xbox One's performance in mind, Microsoft has stated that they will be able to remove said caps in certain games (such as Fallout 4) without the developers having to touch anything using a feature called FPS boost.

The systems' controller is a refined version of its predecessor's, including a slightly smaller size to accommodate a wider range of hands, a USB-C wired connection replacing the microUSB one, a redesigned D-pad similar to the one from the Elite controller, and a share button to allow instantaneous online sharing of screenshots and other data from the console. The new controller is backwards compatible with Xbox One consoles, and all Xbox One controllers and peripherals (minus Kinect) are fully compatible with the X|S.

Cross-generation compatibility extends to other aspects of the console as well. The Series X|S use the same operating system and interface as the Xbox One. Crossgeneration Video Games also benefit from Microsoft's "Smart Delivery" programme, a which makes cross-gen games a seamless experience. Rather than having separate releases for both the Xbox One and the X|S versions, Smart Delivery rolls both versions of a game into a single release, and automatically supplies the correct version of the game based on what system it is installed onto, for free and with all progress, save data, and achievements seamlessly moving back and forth, and multiplayer cross-play between both systems. The use of the feature is optional for developers, however, with some games (such as the FIFA Soccer and Madden NFL franchises) implementing their own cross-gen upgrade systems, and others (such as Devil May Cry 5) simply having no upgrade path at all.