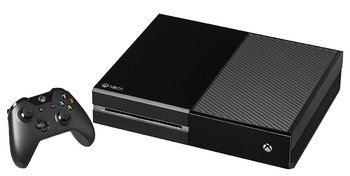 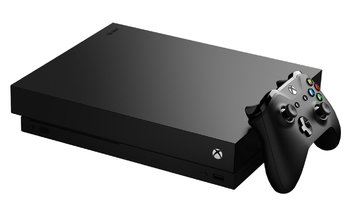 Xbox One X and a black version of the 2016 revision of the controller
Jump Ahead.

The Xbox One is Microsoft's entry into The Eighth Generation of Console Video Games. It was released in North America on November 22, 2013. Its odd name, the "One", represents Microsoft's desire for the system to become an all-in-one living room entertainment system as well as aligning with Microsoft's "One" branding in many of their products. The Xbox One integrates video games with Internet video, music, and live television — a goal Microsoft had wanted to accomplish since the original Xboxnote and even before then via failed efforts such as WebTV and the Microsoft TV software for cable boxes, and which it had partially realized with the Xbox 360.

This system has considerably more power under the hood than the Xbox 360. Like the competing PlayStation 4, the Xbox One switched from a PowerPC chipset to a x86-64 chipset similar to contemporary PCs to allow for better PC ports. This had the side effect of removing hardware backwards compatibility with the original Xbox and the Xbox 360.note However 360 compatibility came back with the new Windows 10 based dashboard in 2015

Aside from providing better graphics, the improved hardware allows for additional features such as full-fledged multitasking. The console actually runs three separate operating systems simultaneously: the first, referred to as "Xbox OS", revolves around the runtime environment for games; the second, built on the Windows NT kernelnote specifically NT 6.3, which is used in Windows 8.1, handles the Dashboard and any apps that don't require native access to the hardware; the third, a version of Microsoft's Hyper-V virtualization technology, allows the first two to run simultaneously. Games and apps can run side by side using a "snap" view similar to the one seen in Windows 8 — demos show a docked instance Skype or Internet Explorer to the side of the screen while someone plays a game. Microsoft has cited the software architecture as the key to future-proofing the console as it was structured from the get go to be upgradeable with new features and services while not compromising performance.

In 2015, the console was upgraded to a variant of Windows 10note Initially the "Threshold 2" development branch in line with the Fall 2015 PC and Mobile Updates which brought, among other things, a redesigned dashboard featuring the return of the popup guide, Xbox 360 backwards compatibility via a self-contained emulator, DirectX 12 which improves both top end graphics performance and low end power efficiency, and the new Microsoft Edge web browser to replace IE. Future subsequent updates in 2016 included Microsoft's digital assistant Cortana (fittingly enough) and support for the Windows universal app platform which allows apps and lighter weight games to run on the console along with Windows PCs, phones, tablets, and other devices. This allows for a more open market for indie developers to publish games that don't require the full power of the system in a way more like a mobile app store. Other 2015 updates included a partial backwards-compatibility program for Xbox 360 games (in practice more like downloaded emulations of 360 games that can use their disc versions as DRM keys) that included the ability to play the entire Halo and Gears of War series on the same console. Support for legacy original Xbox games finally came in late 2017, to the cheer of those who has wanted the feature to play the much older games for a long timenote The original Xbox not only ran on a subset of the ISA used on the Xbox One, but also had a variant of the Windows NT kernel based upon Windows 2000 as well as an older version of the DirectX API, and the X Box One's kernel is a direct descendant of said kernel and API is a newer version of DirectX, which means backwards compatibility with the original Xbox should not only be trivial to implement, but pretty much guaranteed: the Xbox One in a strange way contains an Embedded Precursor that is the original Xbox via its hardware specifications..

The console also features an HDMI in-port, which allows owners to use the system as a passthrough for a cable or satellite box to watch live TV. Users can seamlessly jump between playing a game and watching TV without having to change inputs — and they can engage in more interactive content with their TV through a custom channel guide, termed OneGuide, and app integration. This has also led to the Inception-style discovery that it is possible to play a PlayStation 4, or any other HDMI-out console, from within an Xbox One.

After the system's big reveal in early 2013, concerns were raised about DRM and the included-with-every-system-by-default Kinect's always-on status. The official word from Microsoft said the system would allow used games, but publishers would have to decide if they wanted to charge a fee for each re-install — and games could only be re-installed so many times before the system negated future installations. Microsoft also said it would need to keep track of what games a user had installed, so the console would have to check in with Microsoft every twenty-four hours

(with some content requiring a 1-hour check in). The Kinect would also need to remain plugged into the system at all times, which would allow gamers to issue voice commands to the system and use the Kinect for other purposes (as well as allow Microsoft to mine valuable user data). Along with the $499 price tag, these factors led to increased controversy amongst gamers and the media. On top of those issues, Microsoft had planned to make the console available in a scant twenty-one countries; if you imported a console into a country where you couldn't officially buy it, the DRM would make sure it wouldn't function.

After widespread ridicule from all sides (including a couple of scathing burns from Sony during its E3 2013 presentation), Microsoft eventually reversed its policy on DRM

. The system no longer requires daily check-ins, used game fees, or region coding — but only after downloading a patch to disable those "features"

, which requires an Internet connection when setting the system up for the first time (everyone without Internet access or with slow Internet speeds gets shafted). The backtrack forced Microsoft to drop several features that its original DRM scheme would've enabled, such as loading games installed to the hard drive without the disc inserted and the ability to loan out digital copies of games.note Details are fuzzy on how it would've worked. On August 12, 2013, Microsoft also retracted the "always-plugged-in" requirement for the Kinect

Another challenge faced by the Xbox during this generation was a lack of notable exclusive games. Unlike Sony and Nintendo, who had numerous in-house development teams ready to produce Killer Apps for their systems, Microsoft launched the One with relatively few first-party studios. In the past, Microsoft mostly secured exclusives through exclusivity agreements with third-party developers and publishers; however, these sorts of arrangements became harder to secure during the 8th generation due to the reduced difficulty of developing for multiple systems as well as the increasing cost of game development making Multi-Platform development a better option. Microsoft seems to have realized this, and towards the end of Xbox One's lifecycle acquired numerous previously-independent game developers and publishers in order to bolster their first-party portfolio.

Originally, a second-generation Kinect came with every Xbox One, but later became a secondary purchase at $149.99. While the Xbox 360's Kinect relied on basic skeletal tracking, the new version improves on this by using a full 1080p sensor to read more precise details and subtle motions such as wrist rotation, musculature, and even a user's heart rate. It can now recognize six people at once instead of two, all in a smaller areanote the inability to use it in small spaces such as apartments was a major limiting factor of the original, and with virtually no latency. Voice commands have similarly improved and now come nearly universally implemented in the system. The console can even boot up from hibernation by saying "Xbox On".

The Xbox One has deeper integration with Skype, which will take over for the existing chat system and integration with the now-defunct Windows Live Messenger that the 360 featured. An updated version of SmartGlass is available for smartphones and tablets. The use of WiFi Direct allows it to bypass a router and thus improve its performance. The controller also uses WFD note instead of the 360's proprietary one or Bluetooth which it'll eventually supersede, although Microsoft did release a new model controller that has Bluetooth connectivity for PC gaming.

Microsoft later made a more evolved version of its Xbox 360 predecessor controller with refinements to ergonomics and "impulse triggers" (which contain their own vibration motors for feedback, such as recoil from a gun trigger). Whereas previous generations assigned controllers to virtual "ports", the Xbox One's optional Kinect sensor identifies each individual controller by a built-in infrared LED array. This allows for, among other things, players to switch out controllers seamlessly and split-screen games to automatically align teams/controllers based on where the players are sitting.

At E3 2016, two new models of the console were announced. The first, the Xbox One S is a simple mid-cycle redesign that is 40% smaller, contains an internal power supply, an IR blasternote to allow for TV control without the now fairly depreciated Kinect, which isn't even compatible with the S model without an adapter that has to be purchased separately, and a slight processor bump to support 4K video playback and upscaling games. The more significant of the two is the Xbox One X, released in October 2017. The best way to describe it is a PC in a console format. It offered the bleeding edge specs available in a high-end gaming PC capable of native 4K and VR, at a comparable price, while still featuring the conveniences of a console such as a living room-centric interface. With the One X, Microsoft is looking to break the tradition of console "generations". Using the Windows 10 universal app platform, Xbox One, Xbox One X, and PCs will all be able to play the same software at varying levels of performance. People who want a relatively cheap, convenient box to plug into the TV can buy the One S. People who demand bleeding edge performance and are willing to pay for it can buy a PC or One X. Additionally, Microsoft has plans to launch a pair of Windows 10 based streaming devices: a set-top box similar to an Apple TV or Amazon Fire TV, and a "stick" similar to Chromecast or Amazon Fire Stick (though these plans have since been abandoned). These will expand on their philosophy of breaking the traditional console paradigm by not only offering lighter-weight games built on the Windows universal app model, but also support streaming from an Xbox console as is already capable on Windows 10. Finally, Microsoft well and truly broke away from the console's early years by announcing that both the Kinect sensor and the adapter required to use it with the Xbox One S and X models had been discontinued, and that the company had ceased all development on any gaming applications related to the technology.

While the Xbox One wasn't strictly a failure, it vastly underperformed compared the competition. Microsoft stopped releasing sales numbers in 2015, but it's believed that all versions of the console sold about 50 million units combined by the end of 2019. The PlayStation 4 sold more than twice that amount while the Xbox 360 sold 84 million units. The system's lower sales are frequently attributed to its disastrous launch and the system's lack of strong first-party exclusives. Some of Microsoft's policies also initially scared away indie developers, giving the PS4 more leeway over the Xbox One during the first couple years of the generation.

Succeeded by the Xbox Series X|S. Well, actually, not quite fully yet, since Microsoft plans to continue supporting both the Xbox One and the Series X|S consoles simultaneously for now.