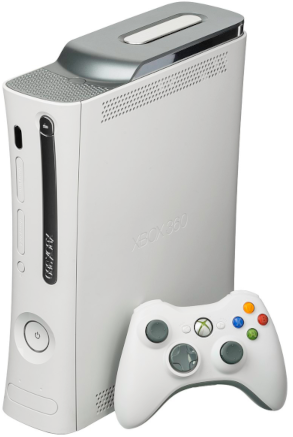 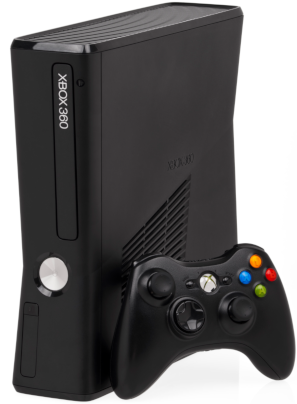 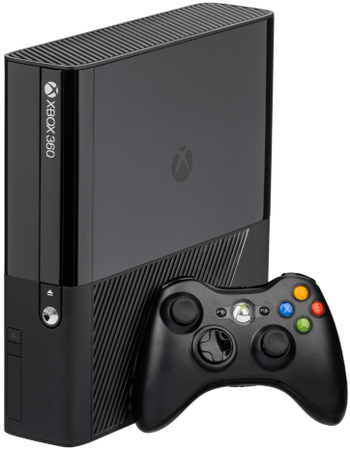 In 2001, Microsoft threw their hat into the console race with the Xbox. While it did decently and even beat the Nintendo GameCube, it only sold well in North America, didn't actually make Microsoft any money, and still got destroyed by the PlayStation 2. Down but not deterred, Microsoft came back in 2005 with the Xbox 360note Again, that's all one word - no hyphen, no CamelCase. a year ahead of Sony's PlayStation 3 and Nintendo's Wii.

The 360 featured a new version of the Xbox Live service with improvements over the original. Though its hardware was not PC-based like its predecessornote While the original Xbox was indeed a powerful console, its design consisting largely of off-the-shelf PC components was expensive to produce, and thus Microsoft decided it needed to go with a more customized design with the 360 in order to be more cost-efficient, the software continued to be Direct X-based, thus it was still relatively easy to port games from the PC platform. This was greatly aided by Microsoft's developer tools; said tools have been praised by, among others, John Carmack of id Software as the best development environment he's ever seen on a console, which helped mitigate the change of CPU architectures from an x86 Out-Of-Order CPU (very much like that in a PC) to a PowerPC architecture-based In-Order CPU (which requires more careful programming).

Unlike the original Xbox, the 360 initially outsold its Sony rival. The PlayStation 3 had an infamously bad start due to its high price tag, it came out a full year after the 360, and it was harder to develop games for due to its complex and unorthodox hardware architecture. As a result, the 360 began getting more exclusive titles as well as securing many of the third-party franchises that were once glued to PlayStation consoles. Microsoft was beating Sony so badly in the Console Wars early on that, for a while, their primary competition came from Nintendo's unexpectedly successful Wii.

By the end of 2008, the Xbox 360 was in second place behind the Wii and still comfortably in the lead over the PS3 in most regions. The only exception was Japan, where its more modest sales are blamed on a lack of exclusive content aimed at Japanese gamers. The lead would narrow as Microsoft would stop dropping prices in favor of upgrading hard drive sizes and bundling additional software and features. The 360's business model in general relied on selling consoles at a loss (although, unlike the original Xbox, the 360 console has turned the corner into profitability) while making money on accessories, Xbox Live Gold subscriptions and DLC. Online purchases were priced in "Microsoft Points," which allowed users to make purchases without a credit or debit card while reducing the credit card transaction fees Microsoft would otherwise have to pay should one be used. This lasted until near the end of the console's life, when Microsoft finally started the user's country's regular currency.

Microsoft did have to take a few shortcuts to keep their system in a reasonable price range, including a cooling system that proved inadequate and a CPU that's a slightly modified version of the PS3's Cell Processor's PPE architecture, though limited to a 10 MB frame buffer and without the numerous hardware complexities that made programming for the PS3 such a headache for. There were widespread reports of "Red Rings of Death" (i.e. general system failure) errors causing consoles to die abruptly, particularly in earlier hardware revisions of the console.note Xenon, Falcon, Zephyr and Opus revisions are all affected. The combination of an undersized heatsink and poorly though-out "X-Clamp" build meant that excess heat would cause the solder balls under the GPU to expand and contract, leading the GPU to develop microscopic cracks within the solder and preventing the chip from making contact with the motherboard. In the end, Microsoft reported that more than half (51.4%) of all original-production 360 systems were affected by the manufacturing defects. This easily could have destroyed the Xbox brand, but Microsoft ultimately took the step of extending the 360's warranty to cover all general system failure issues for three years, at the cost of $3 billion. However, the problem still cost Microsoft their considerable lead against Sony and the PS3, as 360 sales heavily stalled for much of 2007 as a result. The "Red Ring of Death" issue gradually subsided thanks to improved hardware design, especially with the later "Jasper" and "Kronos" revisions.

As for hardware security, Microsoft learned their lesson from the original Xbox and locked the 360 down tight; for one, the boot ROM was contained directly inside the CPU, which also contained a unique CPU key that was tied directly to the motherboard. The CPU also utilized eFuses, which "blew" every time a firmware update was downloaded to prevent downgrading. Finally, Microsoft installed a Hypervisor (basically a virtual machine) in the console to prevent the execution of unsigned code, reading data from the buses, or editing RAM. However, it wasn't flawless. Firmware revision 4532 introduced an exploit that allowed hackers to modify a shader on the video game adaptation of King Kong (2005) to open the system up to arbitrary code execution, albeit you needed custom DVD drive firmware to run a DVD-R with the hacked game on it. But Microsoft responded quickly and patched out this exploit in the firmware before hackers could make this exploit public knowledge. That wasn't the end though. Hackers then discovered that the system's SMC chip disabled system debugging features upon startup, and found a way to bypass the disabling of the CPU and GPU "JTAG" ports, bypass the eFuses and downgrade to revision 4532, allowing the use of the "King Kong exploit". Other exploits involving the JTAG were discovered before Microsoft ultimately fixed them at the hardware level with the Zephyr, Opus, and Jasper models, and with the Red Ring of Death issues on earlier models, these earlier "hackable" models were undesirable and for years the Xbox 360 remained locked down until 2011, when the CPU's thread management code was brute-forced to allow for custom firmware, therefore cracking the system wide open. Despite this, the Xbox 360's security system still succeeded at what it set out to do, which was to protect the system from hackers until the system's twilight years.

A major firmware update (the "New Xbox Experience", or NXE) revamped the user interface and brought new features, such as Netflix integration and the ability to install games to the system's hard drive (although you still need to have the DVD in the tray to play the game, and some older games that cache their data on the hard drive anyway might not experience an increase in speed).

The release of the Xbox 360 is truly when online gaming came into its own. While internet connectivity for consoles had existed in some form or another since The '90s, it was the success of the 360 and its Xbox Live ecosystem that finally normalized online. Xbox Live has been praised for its large community and user-friendly friend management and game launching interface, and there's a large variety of content on offer for download. On the other hand, much of the multiplayer base has been characterized as juvenile and unfriendly and there's a relative dearth of free downloadable content, with the multiplayer service itself requiring a Gold membership unless a particular game (such as EA Sports games) has its own subscription service.

Region Coding is an optional feature for publishers. It's possible, though difficult, to change a console's region, but fortunately most games are published region free, Electronic Arts products and many Japanese releases being the notable exceptions

Despite the usual 5-6 years of active life for a console, the 360 remained on the market until early 2016, just over ten years after its introduction and a little over two years after the release of the Xbox One.

A new hardware redesign, officially dubbed Xbox 360 S or Slim ("Valhalla" by its internal codename and Trinity by its motherboard name) premiered in the Summer 2010. The motherboard was streamlined further, even compared to the then-recent "Jasper" version, with the chipset shrinking to the just two chips (CPU, GPU and RAM all-in-one, made possible since they're now made by 45 nm process instead of original 90 nm), which greatly reduced costs and improved cooling. It also allowed the company to make the 250 GB HDD, encountered before only on the expensive Super Elite series, a standard equipment and install it inside the case itself rather than the outside cab. Wi-Fi is now standard inside-the-case equipment as well. While the console's outer dimensions were significantly reduced, it now has a much more aggressive design, reminiscent of a cross between an original Xbox and a PlayStation 2.

Although the RROD problem seems to have abated with the release of both the Jasper chip and the 360 S (which, at any rate, now uses a blinking red light and onscreen error display rather than the traditional rings), the lightweight design has led to disc scratching, particularly if the console is picked up, moved or shaken while a game is running, becoming a more significant problem.

Autumn 2010 saw the release of the Xbox 360's most significant peripheral: Kinect (which ended up becoming a standard part of the system's successor). Formerly dubbed "Project Natal," Kinect is essentially a camera capable of tracking players' positions with a high degree of accuracy, allowing controller-free gaming and menu navigation. This has paved the way for a series of experimental, family-friendly games, while some enterprising users have discovered other, surprisingly awesome applications

In 2012, Microsoft launched SmartGlass, a second screen experience similar to the capabilities of the Wii U only using a "bring your own device" setup, being available for Windows 8/RT PCs and tablets, Windows Phones, as well as select iOS and Android devices. All first-party and select third-party games in the future will make use of the system, the first of which being Halo 4 and Dance Central 3.

It's interesting to note that unlike most other consoles, Microsoft was not afraid to radically update the console's OS from time to time in order to allow room for more content and keep the experience fresh. It's worth noting Microsoft's background as a software company (as opposed to a consumer electronics company like Sony) as the primary motivation for doing so. The original blade interface was scrapped in 2008 with the release of the NXE or New Xbox Experience based off the "Twist" UI used in Windows Media Center and Zune players of the time. The release of Kinect in 2010 saw a revised version of the NXE based off Microsoft's then-relatively new "Metro" design standard, although for the most part functionally was unchanged save for the addition of the Kinect hub. The fall 2011 update featured the second major overhaul, expanding on the Metro concept and keeping it consistent with that of Windows Phone and Windows 8. It also has the functional advantage of being able to navigate with either controller or Kinect in the same UI, and adds a new search function powered by Bing for more easily finding game and video content from the ever-growing list of providers.

Microsoft, after some rumors about a successor, announced the Xbox One in 2013. Its reception, however, was far from good. Check the correspondent page for details. Around the same time, they introduced the Xbox 360 E model, a smaller model intended to look similar to the Xbox One, with a slimmer, more boxy formfactor, another upgrade to the cooling system, a return to actual eject and power buttons as opposed to the touch sensors, redesigned av outputs and all of the improvements from the Slim model.