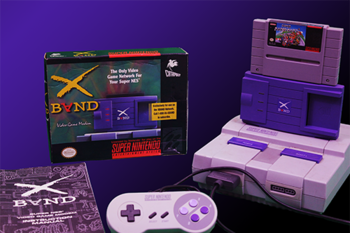 How lucky would it be for some 90s kid to play online on a home console before everyone else did so years later.
An Ur-Example and the progenitor to online multiplayer services gamers take for granted these days, the XBAND (styled as XBⱯND), released in 1994 by Catapult Entertainment for the Sega Genesis and in 1995 for the SNES, is an early attempt at a competitive multiplayer service where players can take on each other online as opposed to plugging in two or more controllers into a console and play split-screen.
Advertisement:

The adapter, by and large, is essentially a glorified Game Genie with a modem tacked onto it and software to facilitate multiplayer gameplay, connecting to a central server which handled matchmaking and statistics. XBAND's system software is very much like what one would expect from a typical online service, with private messaging, news and announcements, user profiles and the aforementioned matchmaking.

Despite being officially licensed by both Nintendo and Sega, practically none of the games supported were released with XBAND connectivity in mind (Weaponlord being the only exception) — Catapult basically had to reverse-engineer almost every game they could support, injecting online multiplayer code by intercepting and patching code for controller input which effectively made it a commercial Game Mod of sorts, not unlike later fan-made multiplayer implementations for the Grand Theft Auto series and other single-player only games. To Catapult's credit though, then-Nintendo of America chairman Howard Lincoln was said to have been impressed at what he saw and couldn't believe at what at the time was deemed impossible, dispelling initial skepticism and allegations of fraud.

Though not the first service of its kindnote An earlier example being the aborted Teleplay Modem developed by Nolan Bushnell of Atari fame, it eventually paved the way for later online services, which eventually gained mainstream popularity in the mid to late 2000s with the rise of Xbox Live and PlayStation Network. The service also saw limited expansion in Japan, with Catapult establishing its own local subsidiary and partnering with Lawson to sell smart cards and modems, and in Brazil by way of Tectoy under the Mega Net 2 branding — former Catapult staffer Konstantin Othmer recalled in an interview that Tectoy, who to this day serves as Sega's authorised distributor in Brazil, was basically left to their own devices, and had next to no backing from Catapult themselves apart from being given the tools and documentation they need to start a localised XBAND implementation, which was kind of hypocritical given how XBAND themselves received tepid developer support. For some reason Catapult wanted nothing to do with Tectoy, probably due to the (questionable) viability of offering a then-unheard of online multiplayer service in a developing country.

It may have had a head start in online gaming, but it wasn't without its pitfalls: the modem can only transmit and receive data at 2400 baud rate or 2400 bits per second, which was even worse than a typical modem of the day; though magazine articles of the day stated that it was sufficient to handle one-on-one online matches, long-distance matches incurred costly fees much to the detriment of some parents who are understandably not pleased with their kids hogging the line for hours just for a game of Mortal Kombat. As stated above, developer support was next to non-existent leaving Catapult to reverse-engineer their way through (and that's despite the aforementioned seals of approval), rage quitting (aka "cord-pulling" or "dropping") and vitriolic harassment from obscene or puerile spam to outright death threats was rifenote This was prior to the passage of the Children's Online Privacy Protection Act or COPPA, which among other things regulated online interactions among minors through chat filters and such. Not that it kept youths from hurling insults at each other nowadays though., and to top it all off, advertising was sporadic at best, with Catapult mostly relying on word-of-mouth and a few magazine articles. At its peak, over fifteen thousand subscribers signed up for the service,note Sources vary; one article reported just 15,000 subscribers

, whilst another claimed over 300 thousand

, but given what former XBAND players can attest, relatively few have heard of the service at all, one of them mistaking it for a rock band. far from what Catapult have hoped, and to top it all off, it was released late into the consoles' lifespan, just as when newer-generation consoles are just around the corner.

Today, a number of dedicated fans are pooling efforts to either document gameplay and other media relating to XBAND or outright revive the service, the latter under the Retro.Live banner — while this was initially hampered by the lack of packet dumps which would've made private servers easier to implement, it was praised by those who worked on the original modem, going so far as to providing source code for the firmware and thereby making the protocols used less of a cold case to crack. Retro.Live now works as it should apart from some latency issues, and is scheduled to launch with full documentation on setting up one's own XBAND server.

covering XBAND's inception, demise, legacy and fan revival can be seen on Wrestling With Gaming's channel. The video took way longer than host Yahel Velazquez anticipated, as it contained interviews and recollections from former XBAND staff, programmers and gamers who signed up at the time, not to mention some previously-unknown facts about the service being revealed.

Tropes associated with the XBAND: