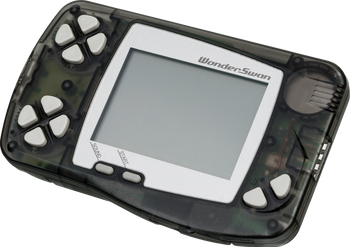 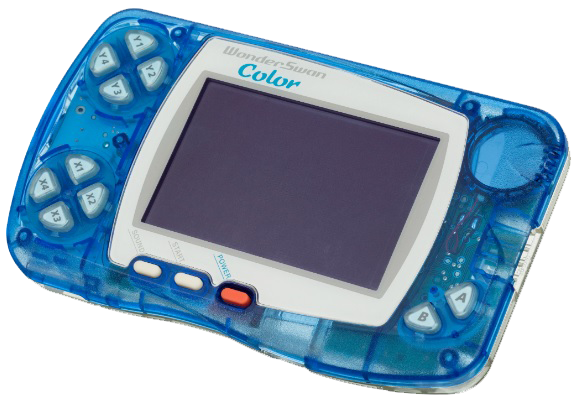 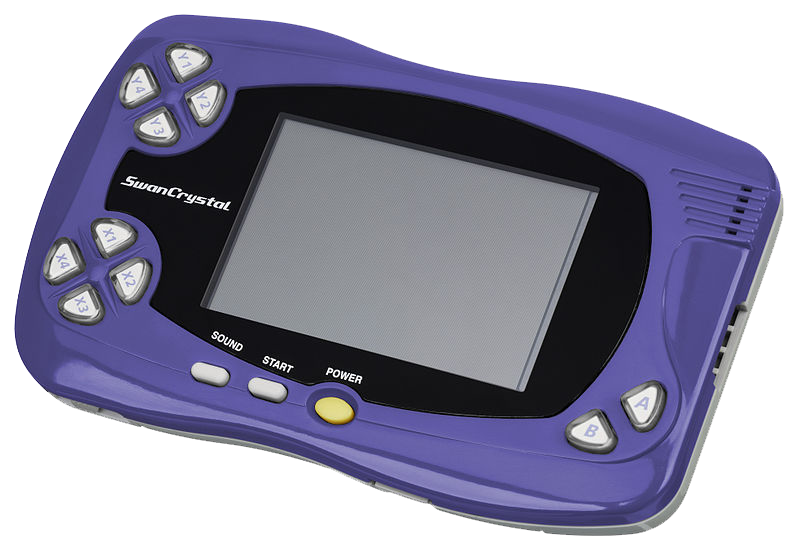 From top to bottom: the original model WonderSwan, the WonderSwan Color, and the SwanCrystal
Advertisement:

The WonderSwan was Bandai's entrant into the handheld console market in Japan and limited parts of Asia, and the final brainchild of Gunpei Yokoi, father of the Game Boy, released posthumously in 1999. Visually, it looks like somebody crossed an iMac of the era (Bondi Blue!) with a Game Boy Advance, and had a variety of system colors available.

Yokoi had left Nintendo in 1996 and wanted to do something different in the game business. After starting Koto Laboratory he was quickly contacted by Bandai, who sought his help to make hardware to enter the handheld gaming business. Though Yokoi died in 1997 before the WonderSwan was finished, he laid the groundwork for the new system and imbued it with his successful Game Boy design paradigm of small size, inexpensive cost and high battery life; the original model lasted 40 hours off a single AA battery for the shockingly low price of ¥4800 (the equivalent of $42 at the time).

The initial WonderSwan was monochrome like the original Game Boy, though it displayed in eight shades of gray compared to the Game Boy's four to allow more detail. Similar to the Atari Lynx, it also had extra buttons that allowed it to be played in both landscape and portrait orientations. While the Lynx employed extra face buttons to achieve this, the WonderSwan went with extra directional buttons, giving it far more flexibility with portrait mode due to the D-pad being fractured instead of solid (i.e. more like a PlayStation DualShock D-pad and less like the D-pads found on Nintendo's various controllers) and generally being more comfortable to hold. Unusually, the WonderSwan's screen has a refresh rate of 75 Hz (NTSC screens refresh at 60 Hz while PAL screens refresh at 50 Hz), allowing games to have more fluid motion than on most other platforms of its time.note This can be clearly seen when playing Cardinal Sins: Judgement Silversword Recycle Edition. The game features an in-game timer in which the sub-seconds part only goes up to 74, rather than 99 to represent centiseconds, 59 to represent frames on a 60 Hz screen, or 49 to represent frames on a 50 Hz screen.

The original model ended up selling well even when going up against the Game Boy Color, but Bandai still felt pressured to release a revision a year into the system's life. The aptly-named WonderSwan Color isn't a huge leap outside of adding color, but the original model was already more powerful than the GBC and didn't really need the extra horsepower. Similar to its competition, WonderSwan Color exclusive games are identifiable by their translucent cartridges. Unlike the GBC, however, the WonderSwan Color is unable to overlay color on the original model's games. The WonderSwan Color did have half the battery life of the original, though 20 hours off of one AA battery still fell in line with Yokoi's design paradigm for the hardware and it continued to sell well. The system got one last Product Facelift with the SwanCrystal in 2002, which employs a TFT screen in place of the previous models' LCD screen. This version didn't do the same numbers as the previous models, especially since the Game Boy Advance was already out by its release.

Unlike previous non-Nintendo handhelds, the WonderSwan had some proper first- and third-party support with a good selection of unique games. Bandai already owned Digimon — a series similar to Nintendo's Pokémon and just as suited for handheld gaming — and used their connections to Banpresto to secure a number of lucrative anime licenses. The system also received games from Capcom, Namco (whom Bandai would eventually merge with), and Squaresoft. Square's support in particular is somewhat humorous; they were still fresh off their bridge-burning with Nintendo over the Nintendo 64, which meant they were unable to contribute to the Game Boy Color's library and had to settle with the only other game in town. The WonderSwan notably got a couple Mega Man Battle Network games, the first remakes of Final Fantasy games, and a port of Romancing SaGa.

While the WonderSwan never released outside of Asia, it is known that Bandai signed a deal with Mattel in 2000 to distribute it in North America. The deal fell apart with no official explanation ever given, though it's very likely that Mattel saw the upcoming release of the Game Boy Advance, read the writing on the wall, and pulled out.

The WonderSwan was a decent success, selling about 3.5 million units over its lifetime and holding about 8% of Japan's handheld market share at its peak. It's believed that the initial success of the WonderSwan Color in particular gave Nintendo enough of a fright to release the Game Boy Advance so quickly on the heels of the Game Boy Color. Whether that's true or not, the GBA did succeed at killing the WonderSwan by reasserting Nintendo's complete dominance of the handheld space. The WonderSwan was officially discontinued in 2003 when it was clear that there was no way it could recover, though many of its games lived on by being ported to the GBA.