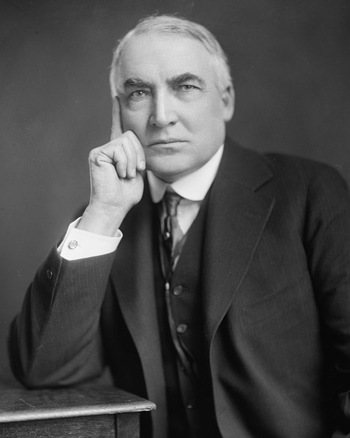 "Our most dangerous tendency is to expect too much of government, and at the same time do for it too little."
"I have no trouble with my enemies. I can take care of my enemies in a fight. But my friends, my goddamned friends, they're the ones who keep me walking the floor at nights!"
—Warren G. Harding, who kept less than scrupulous company.
Advertisement:

Warren Gamaliel Harding (November 2, 1865 – August 2, 1923) was the 29th president of the United States, elected (on his 55th birthday!) with the widest popular vote percentage margin in the country's history (it helped that women could now vote). He served from 1921 to 1923, in between Woodrow Wilson and Calvin Coolidge, and was the tenth Republican Party president. These days, he's considered one of the worst failures to hold the office.

Harding also had a tendency to mis-speak. His speech was nicknamed "Gamalielese" for the examples of Wanton Cruelty to the Common Comma of the likes of this:

"I would like the government to do all it can to mitigate, then, in understanding, in mutuality of interest, in concern for the common good, our tasks will be solved."

If you didn't understand what the hell any of that meant, don't worry. Neither do we.

Many have argued people only voted for him because he "looked presidential". He emerged from a classic backroom deal at the 1920 Republican National Convention (selected mainly because he had stayed out of William Howard Taft and Theodore Roosevelt's feud that split the party in 1912 and had thus not pissed off anybody) and then ran the first modern campaign. Roosevelt had actually been the frontrunner for the Republican presidential nomination in 1920, owed to him mending burned bridges with the party that he had previously scorned in 1912, and it's likely that his still-strong reputation would've carried him to victory without issue, but he died in 1919 before he could be officially picked. Consequently, Harding was brought up to the mantle in his place.

Notable events in his presidency? Harding campaigned on a platform of "a return to normalcy" after Wilson's hand in wrapping up the Great War lost him popularity at home, thus leading the US back into an isolationist phase from which it wouldn't emerge until the later days of Franklin D. Roosevelt's administration (which another world war necessitated). He set up what became the Department of Veterans' Affairs, created the Washington Naval Treaty limiting naval fleet sizes, and appointed William Howard Taft as Chief Justice. Harding was especially infamous for how many of his appointees engaged in large-scale corruption, a stark contrast to Roosevelt's reformist policies both before and during his own presidency.

The scandals are what Harding's presidency is most remembered for today. Harding appointed many political friends to positions of power during his presidency. Known as the Ohio Gang, they pretty much carved up the nation's resources from underneath him, setting up many scandals down the road, the most infamous of which was the Teapot Dome Scandal. Until Watergate, Teapot Dome was the most notorious political scandal in US history.

However, the Harding administration also did many things that could be considered positive. For example, the Washington Naval Conference, which was hosted by the United States under Harding, was intended to stop another World War, especially as tensions between the US and the United Kingdom were quite high in the early 1920s — it only failed later when Japan adopted imperial ambitions that couldn't be fettered by the treaty. (However, to his credit, Harding, knowing his inexperience with foreign affairs, basically left the American position to his competent and honest Secretary of State, Charles Evans Hughes, and promised to stay out of his way.) He was surprisingly progressive when it came to race relations, wholeheartedly supporting an anti-lynching bill, which died in the Senate. He also did not start, or otherwise engage in, any major armed conflicts and helped secure Panama's independence via diplomacy. The crash of 1920 was solved within the first year of Harding's administration, which then led to the "roaring '20s". Additionally, he was one of the few presidents in the past century on whose watch the federal government balanced its budget and lowered tax rates—something a lot of American voters demand routinely but which most realistic economists regard as being Unwinnable by Design. Also, he freed several political prisoners, including the outspoken socialist and anti-war activist Eugene Debs.

Harding was a heavy drinker, but agreed to stop drinking (at least in public) to provide an example to all the Americans who were happily ignoring Prohibition (it didn't work).

According to one account, Harding himself once lamented that he was unfit to be president.

In July 1923, while traveling through Canada after visiting Alaska, Harding developed food poisoning, then pneumonia, which then brought upon the heart attack that killed him in San Francisco, California on August 2.

Due to his administration's corruption, Harding is often a frontrunner on many "worst presidents in American history" lists, although like Ulysses S. Grant, he wasn't corrupt himself, just a Horrible Judge of Character in way over his head.

He was the first sitting U.S. senator to be elected president (he served a full six-year term as the junior senator from Ohio before he was promoted), which only John F. Kennedy and Barack Obama have accomplished since him. He is the eighth and final president to be associated by birth and/or residence with Ohio.note William Henry Harrison, who was born in Virginia, was a resident of Ohio when he was elected. Ulysses S. Grant and Benjamin Harrison were born in the Buckeye State but lived in other states when they became president. Harding followed Rutherford B. Hayes, James Garfield, William McKinley, and Taft for having both apply to him. He's also the guy who coined the term "Founding Father." He used it during an address he gave at the 1916 Republican National Convention, and popularized its usage during his inaugural address. The Lincoln Memorial was commissioned during Harding's presidency, with Honest Abe's son Robert in attendance.

In August of 2015 it was confirmed by genetic analysis that he had a love child, Elizabeth Ann Britton, with Nan Britton, a woman long shamed over claiming this as the result of their affair. It was also revealed that he called his penis "Jerry", which delighted certain segments of the press even more.

When he died, there was an urban legend, believed by many people, that his wife had poisoned him in revenge for his many affairs. And at least one person believed that he committed suicide to avoid being impeached.