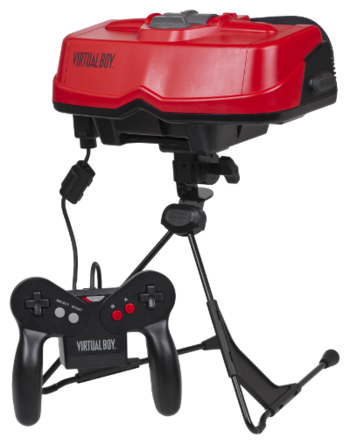 The Virtual Boy was a 32-bit portable... thing from Nintendo released in the summer of 1995 in Japan and North America. It remains the company's most notorious hardware failure, comparable to Sega's tumorous 32X. It was the brainchild of Gunpei Yokoi, father of the Game Boy and co-creator of the Metroid series.

In the 1990s, the possibilities of virtual reality gaming was beginning to manifest right alongside the industry-wise Video Game 3D Leap. It seemed like the natural evolution of the medium would have us fully immersed in 3D gaming spaces, and many companies tried their hand at creating VR headsets and the like. And it wasn't as though such attempts were completely unsuccessful: the same year that the Virtual Boy released gave us the $700 Forte VFX1

, which functioned well enough given the tech at the time. So what happened to suddenly make virtual reality so unappealing to everyone for an entire decade? There are probably a few reasons, but Nintendo's foray into the market with the Virtual Boy likely didn't help.

The Virtual Boy was dead-on-arrival, with industry pundits remarking that it was a novelty at best that had no long-term prospects. And they were right, as the system was discontinued after only five months in Japan and eight months in North America, selling only an estimated 770,000 units globally. The Virtual Boy would never set foot in Europe. Nintendo would go on to be pretty blatant about how much of a failure the system was as well, as it's the only Nintendo system to never see its games re-released in any form. The company would completely ignore its existence until Super Smash Bros. Brawl, as the game's "Chronicle" feature contained a full list of the VB's first and second-party games. Nintendo became far more comfortable acknowledging the Virtual Boy after that, up to and including the point of open Self-Deprecation. All hail the Virtual Boy, indeed

Shigeru Miyamoto stated in an Iwata Asks interview that the Virtual Boy's failure killed all enthusiasm for 3D within the company, making it hard to generate support for the Nintendo 3DS. He believes that the system would've succeeded if it was marketed as a toy instead of a game console.

Yokoi likely shared the same mindset. As the man who created the Virtual Boy and was forced to release it in an essentially-unfinished state (Nintendo wanted to shift all hardware development resources to the upcoming Nintendo 64), he had planned to retire shortly after the system's release, with the Virtual Boy being a parting gift. Its failure meant that he decided to stick around for a bit longer to create the Game Boy Light, so rumors that he was fired over the Virtual Boy wouldn't start circulating.

As an aside, Nintendo decided to use cheap glue on the display ribbons, rather than soldering, meaning that when the glue decayed, the display stopped working. So pretty much any Virtual Boy you manage to find these days might not function, or have been refurbished with soldered display ribbons. The fact that less than a million of these consoles are out there also means that both the system and its games go for stiff prices on auction sites like eBay, so get your wallet ready if you want to experience playing a Virtual Boy yourself.

As with any defunct platform, there is still a cult of Virtual Boy fans and collectors out there, as exemplified by the comprehensive Planet Virtual Boy

, which includes homebrew games dating back to at least '99.

open/close all folders
Released
Note that while only 22 games were released, the February 2003 issue of Tips & Tricks counted the eleven released in both regions as "separate" for the purpose of assessing rarity. The same article also notes that thousands of copies of several Japan-only games (including V-Tetris) were imported by Electronics Boutique (now EB Games) in 1996 and sold for $10.
Unreleased
Note that some of these games have little to no info listed not for the sake of space, but because little to no info is known to have been released about them.

Around March 1996, three games prominently took the spotlight in what was to be a relaunch of the console in both America and Japan. These looked to be the Killer Apps that stood a good chance of at least keeping the system around for a few more months (if not saving it outright), possibly even giving some of the above games a better possibility of seeing release:

While Nintendo Power Issue 87 (August 1996) previewed Zero Racers and listed the aforementioned three games as having release dates of "Fall '96" on the Forecast page, the magazine was evidently told they wouldn't be released and the system was in fact dead - the Virtual Boy section of the Forecast page was dropped immediately afterward and the magazine stopped coverage of the system altogether after Issue 89 (October 1996), which printed a few codes for Jack Bros. and Panic Bomber. The magazine did revisit the system a few times between 2005-09, though.