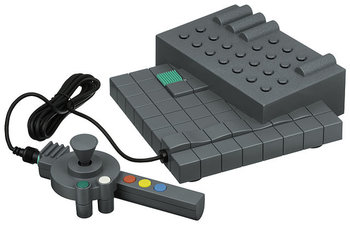 The View-Master Interactive Vision is a video game console that uses VHS and Betamax tapes to play Interactive Movies. It was released by View-Master (best known their toy stereoscopes and reels) in 1989, and didn't last long at all; Tyco had just bought out VM around the same time and decided to discontinue the product after a few months due to poor sales.
Advertisement:

Only seven games were released for the system, all featuring Sesame Street, Muppets and Disney characters.