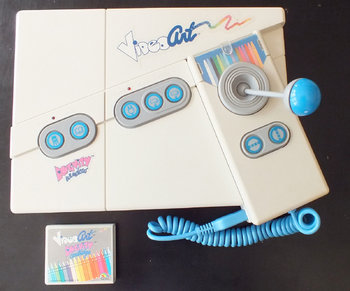 The Video Art was a electronic art video console introduced by LJN Toys in 1987. The system, which hooked to a television monitor much like a video game console, was not necessarily a game or educational system but rather marketed as a toy, an electronic drawing board of sorts.
Advertisement:

The console was similar in functionality to today's basic personal computer paint programs such as MacPaint or Microsoft Paint, and offered interactive coloring book-style games and other basic electronic drawing board functions.

LJN marketed the system as a competitor to television in and of itself, rather than positioning it against other game consoles. (The television commercial began with a child bored with watching incredibly dull, mindless television programs before being shown a Video Art console, becoming excited and demonstrating its possibilities. The tagline was "The best thing on TV ... is me!")

The default screen — turning on the console with no cartridge inserted — produced a solid monochromatic screen wherein the user could draw or color their own creations. A joystick controller, included with the system, allowed selection of 16 colors and various brush strokes, which the user could use to create their drawings; a button allowed the user to erase individual lines or the current entire project. There apparently was no "save" capability, one of several drawbacks to the system; instead, LJN's recommended solution was to record images onto a VHS tape.

In addition to a Video Art activity package included with the system, a series of cartridges were available. Some featured licensed characters, including Mickey Mouse and Looney Tunes, while others had general educational or creative themes with pre-drawn pictures to color in.

Critics were not kind. As put by "The Angry Video Game Nerd" when counted as a game system, Video Art "is the worst game system of all time." Other critics pointed at the system's poor controls, limited color palette and functionality, no save function, dullness and overall poor execution. Poor sales meant a short lifespan for Video Art, as many customers chose to wait for superior, easier-to-use Paint- and computer-based art programs that would be included with Microsoft Windows and other operating systems.

While Video Art was perhaps the only (at least of its time) computer art program with a dedicated console, it was certainly not the first electronic video board application for a personal computer. Computerized video art had existed for commercial applications since the late 1960s, and as early as 1977, for instance, the Atari video game cartridge Surround included a program that turned the TV screen into a video art board.