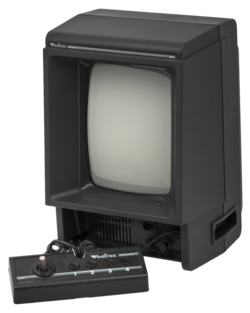 "So if you're into video games, forget the TV! Get into Vectrex!"
The Vectrex was a video game console developed by Western Technologies (later Smith Engineering) in November 1982, and distributed by General Consumer Electronics (later purchased by Milton Bradley). This was notable for being the first home console to use vector-based graphics instead of pixels, allowing for a more three-dimensional feel. You didn't need to hook it up to a TV due to its integrated monitor. Accessories included a light pen and 3-D imager.
Advertisement:

However, the system was never able to reach its full potential due to The Great Video Game Crash of 1983, and was discontinued in 1984. Its single-color display also didn't help, requiring gamers to attach plastic overlays to produce some color and other decorations. Early units also produced a buzzing sound through the speaker due to the way it was wired near the screen, which was fixed near the end of its life.