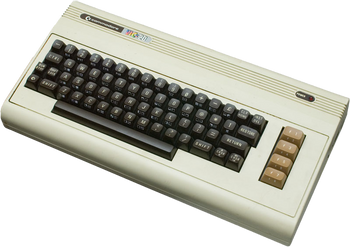 The first computer of any kind to sell a million units, and an ancestor of the Commodore 64.

Jack Tramiel, founder and president of Commodore Business Machines, had always been interested in the low end of the market, and expressed this in Commodore's first computer, the Commodore PET, in 1977. But in 1979, a spreadsheet program called VisiCalc became a Killer App for the Apple ][ (and the Trope Maker for Killer App), and the Apple became the eight-bit market leader. Commodore needed something cheaper than the PET. At the same time, their subsidiary MOS Technology had spent a substantial amount of time and money developing a low-cost video processor named the 6560 Video Interface Chip [VIC] for use in industrial and scientific equipment, but had failed to find even a single buyer for it. Tramiel decided to solve both problems at once by creating a low-cost computer which would be based around the chip.

The new computer used the PET's 6502 CPU and operating system, but had a lot less memory, just 5K, and the VIC, which produced 22×23 character graphics with eight colors. VIC also produced four channels of sound. The new computer also had a cartridge port, and an Atari 2600-compatible joystick port. It did not have the built-in display or cassette drive of the PET. Instead, it had a 'breadbox' case, with a port for a cassette drive, and could connect to TV sets. VIC eventually became the computer's name, but project manager Micheal Tomczyk thought that Vic sounded like a truck driver's name, so he attached a friendly number to the end. It went on sale in Japan in October 1980 as the VIC-1001, and in the United States in May 1981 as the VIC-20, for $299.95. In Germany, it became the VC-20, with the "VC" standing for "Volkscomputer" ("people's computer", like with Volkswagen meaning "people's car") due to the pronunciation of "VIC" sounding somewhat vulgar in German.note Very close to the German equivalent of 'fuck'.

(Speaking of Japan, some of Commodore's VIC-20 games were programmed by HAL Laboratory, a name unknown at the time outside Japan. The far better known arcade titles of its parent company, Nintendo, were in the end not licensed by Commodore.)

The VIC-20 was targeted at users of both the Apple II and the Atari 2600. It was sold at retail stores and toy stores, and promoted by an ad campaign featuring William Shatner. It was a big hit, with total sales of 2.5 million units. It introduced a lot of people to BASIC programming, typing in programs from magazines like Compute!. Most games came on cartridge, to get around the 5K memory limitation. A modem was available for $99, and introduced people to online services like The Source and CompuServe. Its graphics and memory limitations dated it quickly, however, and it was discontinued in January 1985.

The Commodore 64 was its Spiritual Successor; incompatible with the VIC-20, but made by the same people and sharing a lot of its ideas. The C64 uses the same dialect of BASIC, has the same distinctive breadbox case, and some peripherals such as the 1541 floppy disk drive and the 1530 Datasette cassette drive could also carry over, but everything else is either new or updated.