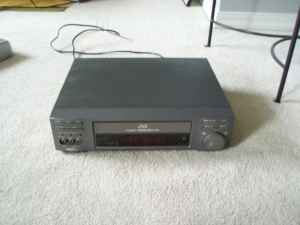 (If you're looking for the 2012 Found Footage horror movie V/H/S, try HERE)

Short for Videocassette Recorder, a now-defunct technology used to supply video for personal use, allowing people to watch television programs they have recorded, and pre-recorded movies from Home Video Distributors, most prominently in the VHS (Video Home System) format.

Videotape has been around since the 1950s, home video since the 1960s (Sony's CV-2000 was the first home video tape recorder on the market in 1965), but these were reel-to-reel systems and thus considered too difficult and expennsive for anyone but professionals and serious hobbyists. A number of companies wanted to emulate the success of the 8-track cartridge and the audio cassette by creating a package that anyone could just pop into a machine. The first cassette-based systems came out in the early 1970s (Sony's U-matic in 1971, Avco's Cartrivision and Philips' VCR in 1972), but it wasn't until 1975 that the first format to achieve any popularity, Betamax (a downsized, simplified version of U-matic), was introduced by Sony. JVC came out with VHS in 1976 in Japan, and RCA and Panasonic brought it to the US a year later; VHS became much more popular due to the 2 hour recording time (twice that of the first Betamax, courtesy of the considerably larger tapes) and lower price. Sony would retaliate with x2 (later named βII) and x3 (βIII), but Panasonic and RCA had created a 4-hour speed on their machine, and JVC introduced a 6-hour speed (EP/SLP), stopping there due to issues with quality and tracking. JVC also licensed the technology to many other companies (Magnavox, Sharp, Panasonic, RCA, GE, Emerson, etc.), which allowed for many more machines to be produced. Despite Beta's higher audio/video quality (250 lines vs. 240 lines) and the introduction of "Beta hi-fi" (copied by VHS with linear stereo, and then with "VHS hi-fi" which worked similarly to the Beta version, but recorded the signal onto the tape differently), their high price and shorter run time made Beta obsolete by the 90snote Sony however didn't seem to learn their lesson from the Betamax debacle, as they continued to develop storage formats that were little used outside their own products and services, including MiniDisc, the UMD and the various incarnations of the MemoryStick; Sony has admitted defeat on the last one and makes SD Cards now.. Rumor has it that Sony's refusal to allow porn films on their format is the main factor for Beta's failure in the 80s (as would be the case two decades later for Blu-ray's victory over HD DVD).note This wouldn't have actually been possible. While Sony did control licencing of the format to manufacturers, they were not the sole provider of tapes, meaning that any company could and did offer pre-recorded adult movies on Betamax pretty much as soon as the decks went on sale. That being said, Beta's inability to fit a football game on one tape and lagging timer technologynote The flagship Sony model at launch in the US, the SL-7200, didn't include a timer; you could buy one as an option, but it was a clunky, mechanical afterthought that could only "schedule" one program at a time. Just a few years later, Panasonic and RCA were including microprocessor-based, multi-program timers on their machines, the 4-program timer on the RCA VCT-400 being a good example. were also major factors.

While Betamax itself has been dead for years (Sony kept it on life support in Japan until 2002, but popular support for it elsewhere had evaporated a good decade before that), the professional Betacam variants of the format have remained in use well into the HD era, and are only now starting to be replaced with more modern Flash Memory and hard disk formats. As for VHS, its high-end formats (Super VHS, W-VHS and D-VHS (an HD VHS format)) never caught on the way Betacam did, and when the broadcast industry started switching to digital in the mid-1990s, they generally chose DV instead. U-matic, Beta's parent format, was never popular for home use, but saw a lot of usage in professional circles and in places like school libraries; it was eventually replaced in those roles by VHS (for educational and low-end commercial use) and Betacam. TV studios and post-production houses still have old machines that can play these formats for archival footage.

For pre-recorded material such as films from Hollywood, it has all but been supplanted by the DVD player, but for people recording their own programs such as for time shifting (recording a show and viewing it later), the VCR was king from the mid-1980's to the early-2000's. It was slowly supplanted by DVRs (such as TiVo and ReplayTV) and DVD recorders, many of which use special services which spoon out TV Guide-type schedule listings for the machines to automatically record programs with. It is still useful as a means for recording and keeping television programs however, whereas DVR and the like are far less permanent. Blank VHS tapes are an increasingly rare find these days but certain retail stores still carry them, more than likely produced by Maxell. The last remaining stronghold of the VCR was the camcorder, in which hard disks and optical discs have proven too sensitive to rough handling and solid state storage cost far too much at videotape's 25GB+ capacities for some years until ever-dropping SDCard prices and dual-mode still picture/motion video digital cameras finally made camcorders obsolete just in time for smartphones to put the last nail in the coffin.

Another good reason to keep an old VCR around is old movies that you find at the thrift store for $1 or less. Sure you could probably download them if you wanted to, but if you're already going to a thrift store anyway, the impulse-buy convenience of it all is worth the dollar. (Not to mention that some of these are older titles, may have been controversially altered in later releases like the Star Wars original trilogy, and/or are so rare that they will never be made available on DVD.) That, and some movie companies have released special VHS editions of their films in the 2010s, particularly Retraux movies or those centering around VHS itself, like the 2009 Gorgon Video release of The House of the Devil, a limited-edition issue of Rewind This!, a special run of Shrek Retold, a 100 print run of Climax in 2019, a release of Scott The Woz's The Internet and You as part of a charity drive the same year, and special copies of...well, V/H/S. Alternatively, if you just want to play the tapes, there are devices available for only about $5 or so that are capable of playing cassette tapes, but don't have any recording capability. These are called VCPs, and some video-rental stores in the US, at least, used to rent them out alongside the tapes if you needed one. These types of players were also commonly found in cars, particularly minivans, in the late 90s and early 2000s before being supplanted by DVD players; aftermarket units with not only VHS capability but also RCA jacks to hookup things like video games and even an over-the-air TV tuner (now obsolete thanks to the digital TV switchover in 2009) were also available.

Because VCRs were the first really popular video format, the first big video rental stores carried them. It was a minor Rite of Passage for teens and young adults in the 1980's and 1990's to spend a certain amount of time standing around the the video store with your friends trying to decide which movie you would rent and whose house it would be watched at. A common sticker on the tapes was "Be kind, rewind" in hopes that users would rewind the tapes so the next user could watch them straight from the beginning without having to rewind the tape first.

People usually fast-forwarded through the FBI Warning Screen, and the Coming Attractions, which is why often on DVDs you cannot skip, fast forward, or use the menu button during them. When Bonus Material was included (rare, but did happen), they usually followed after the main feature on the cassette. Because the magnetic recording and the physical tape wore with use (and rental videos had a lot of wear and tear), sometimes movies which had a sex scene or fanservice would get a little flaky there from people repeatedly rewinding the scene or having it paused there for a long time.

VCRs included a digital clock, which in many people's homes simply blinked "12:00" because no one could be bothered to figure out (or wanted to figure out) how to program it after hooking it up or after a power failure, because the clock wasn't necessary to watch movies - only to program when to record things. This became a common Stock Shtick for someone who was Hopeless with Tech.

Because of the large data storage capacity of videotape, they were also occasionally used as the basis for computer data backup systems and one or two rare consoles. They were also instrumental in the development of the Compact Disc, which used a specially-modified U-matic recorder for master tapes because no one made a hard drive big enough at the time.

The VHS format is more remembered for its shortcomings rather than its merits, often portrayed as having terrible picture quality and easily becoming warped or being eaten up by the VCR. Early advertisements for DVD probably helped spread this perception (continued by ads for VHS-to-DVD transfer services who would have you believe your VHS tapes are rapidly withering away on the shelves), but it is in most cases unfair, as picture quality often depended on how clean the VCR was and on how well the cassette itself was stored and cared for. Many VHS tapes have survived from the 1980's to modern times relatively unscathed and with fairly decent picture quality, as uploads of old television programming to YouTube prove. Another thing to consider is that on pre-2000's square-shaped CRT televisions, VHS picture quality was much more passable than on a modern HD flatscreen TV; this was also the case for old video game systems. When first introduced, VHS tapes were given a conservative lifespan of 10-25 years, but depending on how a video cassette is stored and taken care of, it may exceed that estimate by a long shot. VHS tapes still haven't been around long enough to give a definitive life expectancy to. Interestingly, cassettes made in the 1980's were made from sturdier materials, and may ultimately exceed the lifespan of the cheaply-made ones that flooded the market in the late 1990's.

There were several higher quality versions of VHS (Beta also had a short-lived format in the mid-to-late '80s called Super Beta):

Also, the terms "VHS Player" and "VHS tape" are retronyms which came into use since the advent of DVD, as after the demise of Betamax they were more likely to be referred to in the common vernacular as a VCR, and video cassettes (or just tapes or videos) respectively. So remember that if writing a Period Piece set in The '80s or The '90s.

And finally, a bit of trivia: