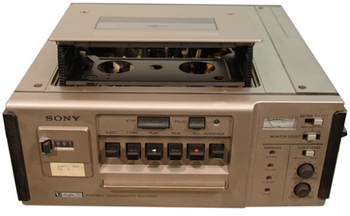 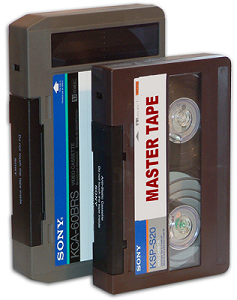 Predating the VHS and Betamax formats by a few years was Sony's U-matic, introduced in 1971 (after being prototyped in 1969). It was one of the first formats to contain the reels of videotape in one cassette, but was also too expensive for the average consumer that Sony was hoping to attract during its launch, hence its widespread adoption by TV studios and educational institutions throughout the '70s, replacing the old 16mm film reels they used for decades. Newsrooms latched on quickly because tape didn't have to be developed the way film did, making turnaround times for remote packages much faster and eliminating the phrase "Film at 11" from TV stations almost overnight, though it persisted in the general public for years.

U-matic was so named because the tape wrapped around the video head drum in a U shape when it was loaded in the machine. And unlike other videotape formats, its reels moved in opposite directions when playing, fast-forwarding, or rewinding. A red plastic button was also provided on the bottom of the tape, which can be removed to prevent any accidental recording.

U-matic had several shortcomings, especially early in its lifespan. For one, prolonged friction of the tape against the drum heads when paused would cause the tape to wrinkle or rub the oxide coating off of it, degrading the signal in the paused area. U-matic also had trouble reproducing the color red, causing it to appear very fuzzy and saturated, to the point where actors or anchorpeople would be discouraged from wearing red on camera to avoid drawing attention to this.

The format was also used for digital audio recording with digital/analog converters. It was used for digital masters of early Compact Discs, as there were no hard drives that could hold that much data at the time.

By the early '80s, U-matic would be superseded by Betacam, which smoothed out many of these flaws, but many TV studios and post-production facilities still have old U-matic machines for archival footage.